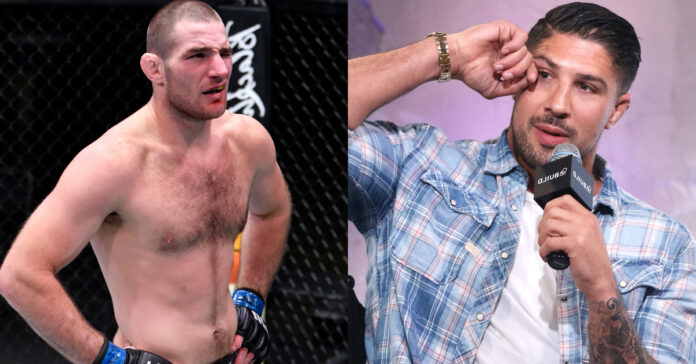 Sean Strickland teased his interview with former UFC heavyweight Brendan Schaub, which is unreleased as of yet.

The former top-five-ranked middleweight contender dropped down to seventh place after his latest outing against Alex Pereira in the International Fight Week card of UFC 276 in July. Pereira leapfrogged his competition to get a title shot against the reigning 185-pound champion Israel Adesanya at UFC 281 in Nov. after delivering a vicious left hook knockout of Strickland.

Strickland appeared to take the loss in stride and got paired up with former title challenger Jared Cannonier, who’s coming off a failed title shot against Adesanya in the main event of UFC 276.

Ahead of a nearing interview with Brendan Schaub, Strickland previewed the appearance on his social media accounts.

“Just finished a Brendon Schaub podcast,” he wrote. “I think this might be the last one I do… I’m not stable enough to speak.. after I awhile I start advocating for puppy murder. No further request…”

The 31-year-old chose not to comment further on his mysterious comments but one thing seemed to be clear, he has issued a warning for those who may be easily offended by some of his expected statements.

With multiple shows under his belt, Schaub revealed that Strickland appeared on his popular YouTube series, Food Truck Diaries, tweeting, “Finally got this savage on #FoodTruckDiaries Sean Strickland coming in HOT.”

Cannonier is excited to face Strickland

In a recent interview with Helen Ye, “The Killa Gorilla” heaped praises on Strickland for his antics during the UFC 276 pre-fight press conference.