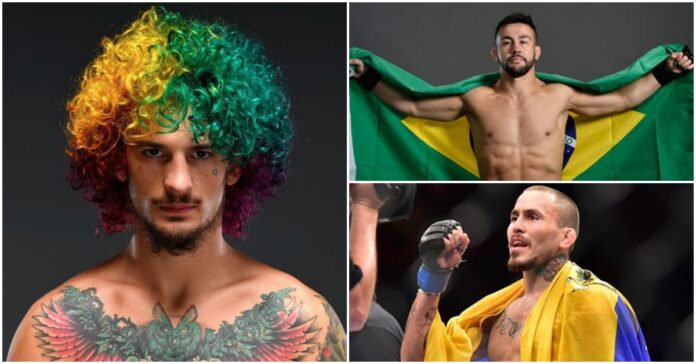 Sean O’Malley makes headlines again, as he maps out his plan to a title shot in early 2023, stating highlight-reel finishes over Pedro Munhoz and Marlon Vera will elevate him to challenge for the bantamweight belt.

Could two impressive victories set Sean O’Malley up to challenge for 135lb Gold?

“Two more finishes — early 2023, I’m fighting for the belt, whoever has it,” said O’Malley on the MMA Hour. This confidence in ‘Suga’ has always been an integral aspect of his personality, and it is at an all-time high once again as he prepares for his upcoming bout with Pedro Munhoz at UFC 276.

O’Malley is a born star, who continues to surge and draw attention in and out of the octagon, so if Sean O’Malley can predict his way to a title shot and continue to do so impressively, the UFC will have no option but to grant him a title shot.
O’Malley is currently booked to face Pedro Munhoz and an impressive victory will put him exactly where he needs to be to stake his claim as a top contender in the bantamweight division.

In a recent interview on the MMA Hour with Ariel Helwani, Sean O’Malley answered questions about his fight with Pedro Munhoz.

O’Malley noted that “It’s a good step up. If you look at his last couple losses there to former champions Dominic Cruz, Jose Aldo, and Frankie Edgar… I think ‘Prelim Pedro’ is the real deal.”

Later in the interview, O’Malley mapped out his route to a title shot in early 2023. He went on to say, “I think after this fight, I go out there, I’ve got to finish Pedro — and I go out there, let’s say I finish Pedro, I get a top-5 guy, whoever that is.”

One potential top-five opponent would be Marlon ‘Chito’ Vera, the only man to have defeated O’Malley so far. O’Malley did not seem adverse to a fight with Vera, stating that “depending on if Chito (Marlon Vera) gets a fight booked, I know that’s a fight that I want.” Having his only professional loss against Marlon Vera, Sean O’Malley said that “he [Vera] has earned” a rematch.

That is a possible rematch that fans and the UFC can get behind, both are young hungry contenders who are eager to challenge for the belt in the talent-rich bantamweight division. Two impressive wins over top contenders in Pedro Munhoz and Marlon Vera will leave Sean O’Malley a definite contender in the bantamweight division. Both fans and the 135lb elite will have their eyes on O’Malley, possibly even more now after his most recent interview.

Will Sean O’Malley fight for the bantamweight title in 2023?