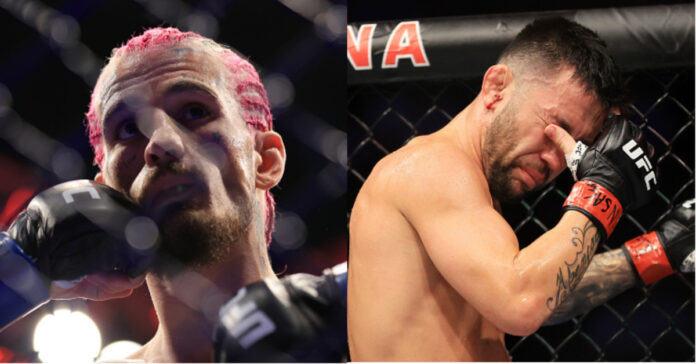 At UFC 276, the main card opened with a bit of controversy when Sean O’Malley’s bout with Pedro Munhoz was waived off in the second round.

At the 3:09 mark of the second round, O’Malley reached in and grazed the eye of Munhoz bringing a pause to the action. After a few moments, the cageside doctor was called in to review Munhoz’s condition. Munhoz could be heard on the broadcast repeatedly saying that he couldn’t see and that all he could see was black. As a result, the fight was called off and ruled a no contest.

During the post-fight press conference, Sean O’Malley discussed the fight and when asked if he felt that Munhoz was “looking for a way out,” O’Malley agreed with that statement emphatically.

“A hundred percent, that’s what going on in my mind. I’ll have to rewatch it. I was piecing him up. I didn’t get hit once. He came in there, he said I was gonna kick his legs and try to take him down. He tried kicking my legs and it damaged him more. He couldn’t get me up against the fence. He couldn’t take me down. I was dominating that fight.

“Initially when it happened, I’m like, okay. Didn’t feel like it was bad. Thought we were going to be fighting in 20 seconds. I didn’t think the fight was gonna be stopped. I was dominating that fight. I checked every one of his leg kicks. I could feel his shins cracking. Every time he would throw a kick, I would check it and I could tell it would hurt him. I didn’t get hit one time. I was dominating that fight. I was piecing him up. I was finding my range. It sucks.”

When O’Malley was informed that two of the judges scored the first round for Munhoz, ‘Sugar’ responded with criticism, saying that the checked leg kicks should count as a strike for himself.

“Have those judges kick me and I’ll check their kick and they’ll be like, ‘oh, okay, that hurts.’ That’s a strike for me. That hurt Pedro every time he would kick me and I’d check it, that hurt him. For those judges to say that’s a score for him, they’re completely stupid.”

Unfortunately for O’Malley, checking a leg kick is considered a defensive maneuver and the ABC’s (Association of Boxing Commission) criteria for MMA judging specifically states that “no scoring is given for defensive maneuvers.”

When asked if he would like to run it back with Munhoz, O’Malley said that he feels like he won the fight, but without the emotional aftereffect of a traditional win inside the Octagon. It’s unclear if the two will meet once again down the line, but O’Malley may want to take a few moments to review the judging criteria for mixed martial arts head of his return to the Octagon.