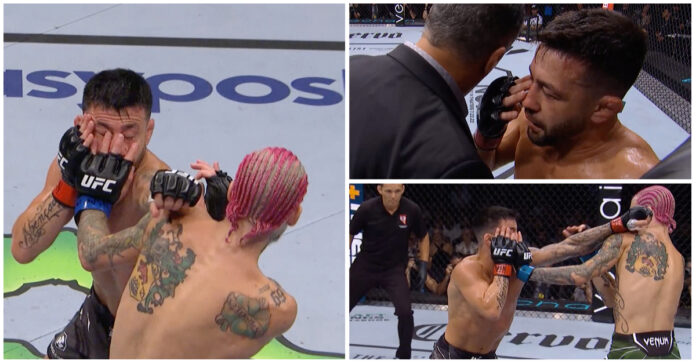 Sean O’Malley vs. Pedro Munhoz was ruled a no-contest in round two at UFC 276.

Going into the bout on a three-fight win streak, Sean O’Malley faced a major jump in competition when he took on Pedro Munhoz, his first ranked opponent at tonight’s UFC 276: Adesanya vs. Cannonier at the T-Mobile Arena in Paradise, Nevada.

O’Malley’s match with Munhoz opened the main card of the night. He secured a second-round finish with just two seconds left on the clock at the time of the submission. Munhoz began to chop away at O’Malley’s legs from the opening round. Although ‘Suga’ did a good job of checking many of those low kicks, Munhoz was able to land a considerable amount and appeared to be ahead on the scorecards.

In the second round, an unintentional eye poke from O’Malley would cause the referee to separate the men. Munhoz complained that he was unable to see out of the damaged eye. As a result, the contest was ruled a no-contest into the fourth minute of round two.

Below, catch the highlights from the No-Contest between Sean O’Malley & Pedro Munhoz