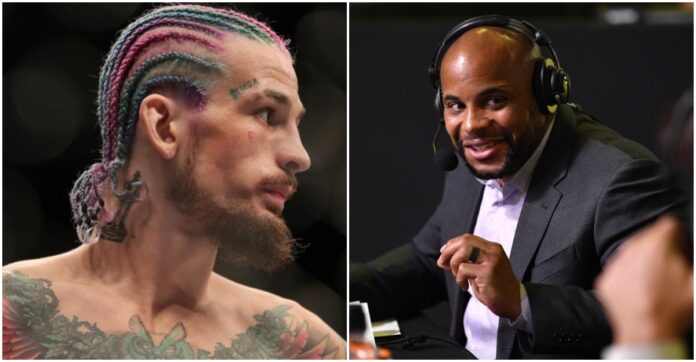 UFC hotshot, Sean O’Malley, is under the impression that Daniel Cormier doesn’t want to see him succeed.

O’Malley is set to return at UFC 276 against Pedro Munhoz in July among a stacked fight card for UFC International Fight Week. The fight is undoubtedly the bantamweight’s biggest challenge to date and the step up in competition the fans have been yelling for. ‘Sugar’ is hopeful of furthering his win streak to three on the bounce, with knockout’s over Raulian Paiva, Kris Moutinho, and Thomas Almeida.

Ahead of July 2nd, O’Malley has recently explained his annoyance towards UFC commentary, aimed at Joe Rogan and Daniel Cormier.

It’s not the first time O’Malley has discussed his anger with the UFC commentary team, having picked out Cormier before. The 27-year-old explained Rogan and Cormier irritated him during his loss to Marlon Vera at UFC 252. On the DC & RC show, Cormier jumped to his own defense, indicating he brings the loss to Vera purely because it’s the only time O’Malley has been in serious trouble.

O’Malley took the conversation to his own podcast, BroMalley, and weighed in on his relationship with Cormier. The MMA Lab representative strongly suggested that ‘DC’ wants him to lose. However, also stated that if he was in Cormier’s shoes, he’d probably want to see himself lose too.

What do you make of the Sean O’Malley and Daniel Cormier back and forth?