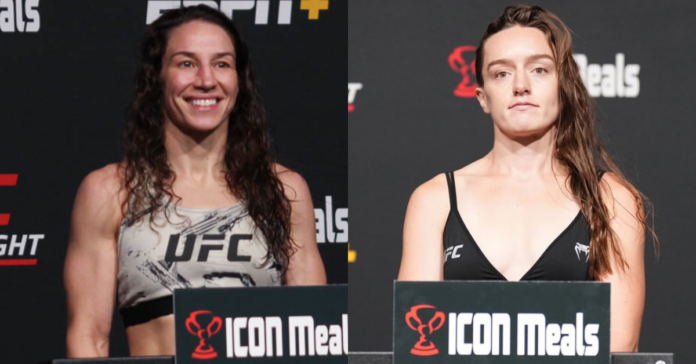 Olympic silver medalist Sara McMann is not happy with Aspen Ladd’s weight miss. The fight between McMann and Ladd was booked for UFC Fight Night Sandhagen vs. Song on September 17 but was forced to be scrapped when Ladd missed weight by two pounds over the bantamweight limit.

The US-born wrestler took to Instagram to share her thoughts on the matter and how irritated she is. Sara McMann said:

“I’m really disappointed that things went the way they did. I’ve never once missed weight in my career in wrestling or fighting. Missing weight is the equivalent of cheating. You gain such an advantage for every pound that you don’t have to cut. I wish that the promotions and commissions would change the policies so this isn’t even an option at this professional level. That being said, the @ufc took very good care of me for coming in and doing my job like always.”

McMann added that sometimes it’s not even about the money because she truly wants to compete and show her skills. The American fighter continued:

“I wish I had been able to compete and show the hard work and growth I’ve made since the last fight. I’ll keep sharpening the ax and do some BJJ tournaments in the meantime until my next fight is scheduled. Thanks for everyone who has reached out, you’re the best!!”

Aspen Ladd has shown a pattern of canceled fights recently. In her last nine scheduled bouts, only two happened while four of them were canceled due to Ladd. In two of these bouts Ladd was forced to withdraw due to weight issues, one was a torn ACL, and one is unknown. Three of these canceled bouts were against Sara McMann.

Other fighters showed support for the Olympian in the Instagram comments. Most notably, UFC Strawweight Champion Carla Esparza who said:

“That really sucks, sorry girl. Glad you were taken care of and healthy, hopefully you can have a quick turnaround!”

‘Cookie Monster’ Esparza’s next fight will be a title defense at UFC 281 when she will meet the former world champion Zhang Weili.

Flyweight fighter Lauren Murphy, who is just coming off of a win over Miesha Tate, shared her annoyance as well, and said:

“It says so much about you that you’ve had two full combat sports careers and have never missed weight. Too many fighters can’t say the same!! it’s cheating!!”

Sara McMann has been a main fighter in the UFC since making her debut in 2013. In her storied career, she has faced champions such as Amanda Nunes, Miesha Tate, Julianna Peña, Ronda Rousey, and other fighters. She will likely be back for another fight in the UFC in 2023.