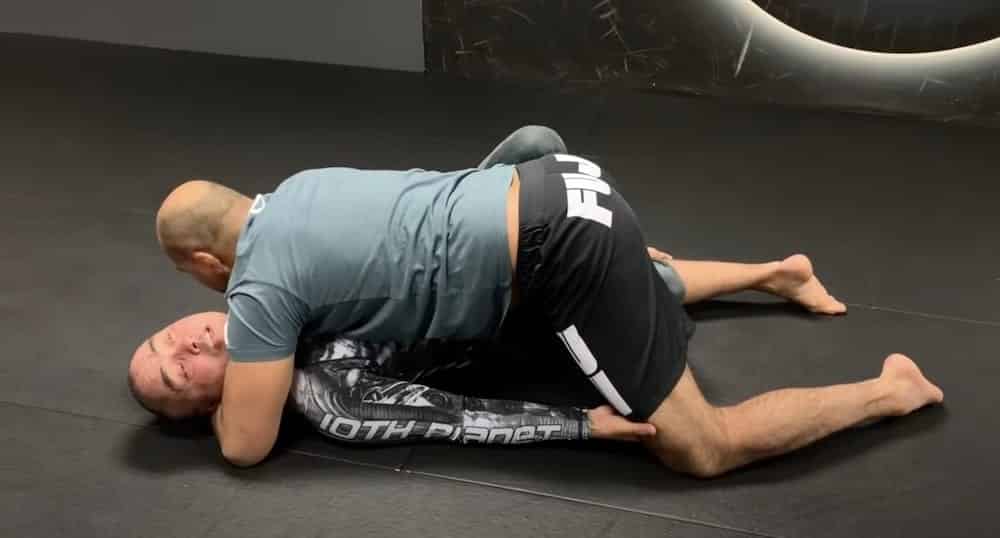 When rubber guard first came out many BJJ traditionalists dismissed it as ineffective. Just a gimmick that wouldn’t work in competition.Turns out many of the old guard were wrong about Eddie Bravo’s guard and the 10th Planet system.

The rubber guard system is one of the most unique and diverse guard systems in BJJ. Not only in BJJ, but also proven effective within MMA.

Here is just about everything you need to know about the rubber guard. We’ll go into how Eddie Bravo came up with it, how it works, and detail a few different techniques.

Who came up with the rubber guard?

The rubber guard came from the mind of BJJ black belt and 10th Planet founder Eddie Bravo. When Eddie began learning Jiu Jitsu with Jean Jaque Machado, he always looked to create his own style.

Before he started developing the rubber guard, Bravo began doing a submission as a blue belt he dubbed, “the twister.” After the twister, he began looking for ways to control his opponent in guard.

What he came up with was the rubber guard. An open guard system that Bravo made particularly for No-Gi and MMA.

He would begin breaking his opponent’s posture and bring his leg behind their head to keep control from there. This initial rubber guard control would open up numerous possibilities for different sweeps and submissions.

Today, Eddie and his 10th Planet students have continued developing the rubber guard. The guard now has numerous variations making it one of the most diverse guard systems in Jiu Jitsu.

How does the rubber guard work?

The rubber guard is a high guard variation that is used to keep your opponent’s posture broken. Starting with an underhook and overhook to control your opponent’s arms and then bringing your leg behind their head.  Then you bring your foot over your opponent’s head to isolate their arm.

With your opponent’s arm isolated and posture broken, you now have a variety of attacks you can go to. The goal Eddie Bravo had in mind when he came up with the rubber guard.

Getting into the rubber guard

Before you go into submissions and sweeps from the rubber guard, you must know how to get to it. Your opponent isn’t just going to give you the guard, so you’ll need to set it up.

As Eddie details in his rubber guard instructionals, you must give your opponent a position in order to get one. The common set up to get to the rubber guard starts from half guard.

You bait your opponent by giving them an underhook and a way to pass your guard. To stop them from passing, you’re going to do a palm up stiff arm on their knee. Bravo calls this stiff arm, the pimp hand and you must keep it strong.

They will instinctively back out and when they do,  you grab an underhook on your opponent. From there, bring your leg up behind their head, grab it, and pull it over their head.

You are now in basic rubber guard with different attack options.

Omoplata from the rubber guard

One of the most common attacks from the rubber guard is the omoplata. You start from the basic rubber guard, where you are holding your leg behind your opponent’s head to break their posture. Within 10th Planets academies, this control is referred to as New York.

All you need to do now is grab their hip, sit-up, and drive your body into your opponent’s shoulder.

Triangle from the rubber guard

After establishing this control, you drop your other elbow to the mat and frame on your opponent’s bicep. From here you actually have two triangle options with this position.

If you want to transition to a normal triangle, control their head/arm and switch your lock.

Armbar from the rubber guard

To get an armbar from the rubber guard, you start in mission control and go to a position called invisible collar. The invisible collar is where you’re underhooking your leg and lock your feet together behind your opponent’s head.

When you get to the invisible collar, your opponent can’t stack you and you have their arm isolated.  With that arm controlled, you can now go into your armbar.

Take your arm and grab your top foot and bring it in front of your opponent’s face. Then take double wrist control, swivel your hips, and take the armbar.

The carni is a shoulder lock you can get from a rubber guard control called New Jersey. First you start in the z guard position in half guard.

To get to the shoulder lock, frame on your opponent’s head and bring your leg over their head. Then go belly down slightly and control their far arm.

With their arm isolated, grab their wrist and push their arm up to finish the shoulder lock.

The hindulotine is a guillotine variation that comes off a type of rubber guard called hindu control. There are 2 ways you can do the hindulotine.

If your opponent has his head off to the side when in mission control this is the faster option. Take your choke hand and rotate it over their head, around your toes, and in front of their shoulder. From there, put your hand under their neck and clasp your hands together with your elbow up for the finish.

The other option is when your opponent stays on the center of your chest in a rubber guard. Start by taking your far arm over your opponent’s head and grabbing their armpit for control.

With that control secured, you do the same motion with your choke hand like the first entry. Wrapping your arm over your foot, then in front of your shoulder, and then locking in your choke.

In rubber guard, you have a double armbar option that 10th Planet students call the sorcerer. You start out in mission control and go to a position called chill dog.

To get to chill dog, underhook your controlling leg and bring your other leg up and cross your legs together. Then go to a position called double bag. This is where you reach inside your legs and pull the top of your foot down.

From the doubler bag, you go to the sorcerer. Both of your legs are crossed in front of your opponent’s face.

You have the options to do a neck crank or a double arm bar.

Tips for using the rubber guard

The rubber guard can be very effective if you know how to properly use it. Here are some tips to remember when using the rubber guard.