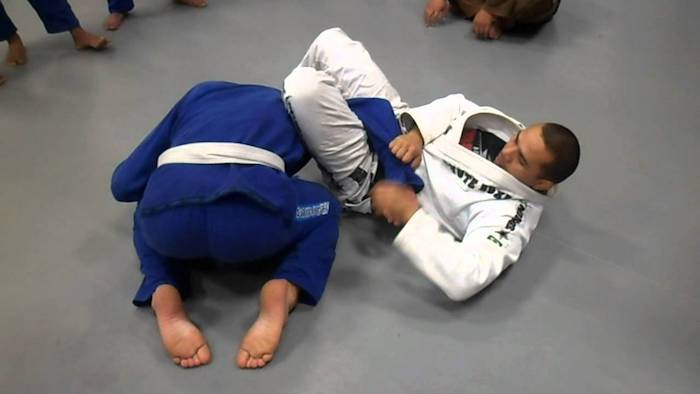 To have a top notch guard game in Jiu Jitsu one of the must know submissions is the Omoplata. It is one of the core basic submissions you must know, but it’s more than just a submission. The Omoplata is also a great technique to sweep opponents with, as well.

But the Omoplata wasn’t always given its proper respect for its effectiveness. This technique wasn’t universally taught in every academy until a little over 25 years ago.

It took time for the Omoplata to get its respect, but the technique continues to be revolutionized in modern BJJ. Below we detail everything you need to know about the Omoplata. Everything from when it was created, how it works, and detail a few of the many Omoplata techniques.

When was the Omoplata created?

In the Portuguese, the word Omoplata is scapula and they used this word because the submission attacks your scapula.

Though the submission has been around a long time it wasn’t universally taught in Jiu Jitsu schools. For many years, the Omoplata was considered a low percentage submission.

For almost 70 years, the Brazilian Jiu Jitsu Federation of Brazil(CBJJ) only recognized the Omoplata as a submission. It wasn’t until 1994 did they start awarding sweeps from the Omoplata position.

Since then and thanks to innovators of the position like Nino Schembri, grapplers saw the Omoplatas’s potential. The submission is now taught in all Jiu Jitsu academies and considered a must know technique.

How does the Omoplata work?

How the mechanics of the Omoplata works are very simple and straightforward. The key to the Omoplata is weight placement and control.

Once you isolate an opponent’s arm and establish control over them is when you start distributing your weight on them. As you lean in to the opponent, you’re putting downward pressure onto their shoulder forcing them to defend or submit.

A No-Gi is pretty simple to do with only a few steps to complete. You start this technique from closed guard.

Take wrist control on one of the opponent’s arms and push it against your hip. Your other hand reaches over and grabs hold of their shoulder.

After you have control of their arm with both hands, pull them down as you kick your leg through. Then rotate your hips 180 degrees to where you are parallel with your opponent facing the same way.

Next drop your leg down on the opponent’s arm with force in order to establish control. This keeps them in place along with hugging their hips to prevent them from rolling out of the position.

Now that you have the opponent in position and established control, you can lock in the pressure. With one leg around their arm and with their hips controlled, lean into them slowly to get the tap.

A basic Gi setup is similar to the No-Gi setup, but it involves using the opponent’s gi for control. On the same side of your opponent take sleeve grip with one hand and a collar grip with the other.

Use that sleeve grip to pull them down, hooking their arm around your hip. At the same time you kick your leg through just like in the basic No-Gi technique.

Turn your hips 180 degrees facing the same way as your opponent and control their hips. In Gi, you can use their pants and to belt to hold them in place or just hug their hips.

The finishing steps are also about the same as with a No-Gi Omoplata. Lean in to them for the finish and if you want to keep your sleeve grip for control you can.

Doing an Omoplata from lasso guard is a really easy and fluid technique to do. To get your lasso guard have one grip on their collar and a sleeve grip on the arm you’re attacking. Loop your leg in and connect your leg to the opponent’s armpit.

From there, let go of the sleeve grip and begin turning on your shoulders inward towards your opponent. You naturally roll right into position for the Omoplata.

For the finish hug your opponent’s hips and submit them.

If you’re flexible and like to play rubber guard, there are numerous Omoplata options available. One of the most easy is this one.

Get to New York position, where you’re holding your leg behind the opponent’s head. Their arm is already on the mat in this position, so it makes going to an Omoplata really easy.

Just push their head and pull your leg over to get right into position for the Omo.

Omoplata from side control

You can even hit an Omoplata from side control. A really cool way to do it is from reverse kesa gatame. This type of side control  is where you turn on your side and are facing the opponent’s feet.

You step your top leg over the opponent’s arm that is behind you and grab a sleeve grip. With your other arm, you’re reaching over and controlling the opponent’s hips keeping them in place.

To get in position for the Omo, move your hand to the other side of their hip for a base. Now hook under their arm with your near leg and grab their elbow to begin turning over your opponent.

To turn them over do a back step over there to start the movement as you go over their body. They end up right on their stomach for you to finish your Omo.

When you have an opponent in mount they try a bridge and roll escape, you can catch them with an Omo. As they turn on their side take an overhook and bring your foot up next to their shoulder.

If they turn, they’ll naturally go to the position, but if not grab their arm and pull them into the Omo.

When you get to the Omoplata position, a common defense is for the opponent to posture up. Usually when you try to kick your leg down, they’ll react by posturing up.

If they do this it opens them up for an easy sweep. So let’s say you already got to the Omo position and they’re defending.

Fake like you want the Omoplata and kick your legs down to knock their base forward. Naturally, they will react by sitting up and as they do this is when you sweep them.

As they posture up, immediately do a back roll to sweep them over using their own energy against them.

Tips for doing the Omoplata

For as diverse of a technique as the Omoplata is the submission has details that you cannot forget. Remember these tips below for the next time you go for your Omoplata.