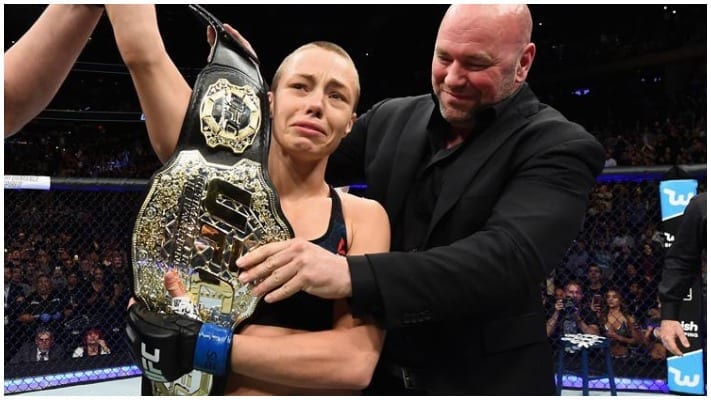 Rose Namajunas has spoken out for the first time since Dana White publicly claimed she is not interested in fighting Weili Zhang.

In a recent interview with BT Sport, White revealed ‘Thug Rose’ was not interested in fighting for the strawweight title and he was instead looking to book the champion against another top contender, he said.

“What I’m hearing is Rose Namajunas does not want a title shot… So we’re looking at the rankings and how it plays out, it would play out as Weili vs. Carla Esparza.”

“That is absolutely not true,” Barry said. “We absolutely want the title fight. Who would turn down a title fight? We just don’t want to air this out publicly. If there was some confusion, they can call us to clear it up.”

On Sunday, Namajunas took to her YouTube channel to publicly address speculation about her next fight, she said.

“I don’t know if you follow stuff that’s out there in the MMA news, but apparently there’s some confusion going on about my next fight and whatever. So I don’t know. I’m not worried about any of that. I’m just ready to fight. I don’t know what’s going on, but I know that you guys are ready for me to fight, too.”

“Maybe there’s a misconception out there that I’m weak-minded or whatever or, ‘I can’t handle the pressures of being champion,’ or whatever the (expletive) people say. That’s not true,” Namajunas added. “That’s what I live for. I’m the pressure cooker. What better reason to remind me why I fight than (my grandfather) passing away. I am super ready for all of that, because that’s what I am fighting for.” (Transcribed by MMA Junkie)

Do you think Rose Namajunas will fight for the 115lb title in her next fight?