LowKickMMA.com
Home UFC News Robert Whittaker Talks Fighting Khamzat Chimaev: “It Would Be Tricky, I Would... 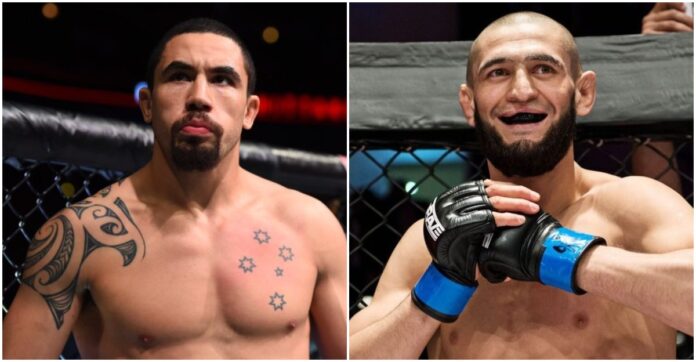 Ahead of UFC 275 in Singapore, Robert Whittaker answered a handful of questions from fans as he appeared on stage as a guest fighter, alongside former UFC light heavyweight champion Jan Błachowicz.

One intrigued fan directed a question at Robert Whittaker, asking how he believes a fight would play out between himself and Khamzat Chimaev after watching Chimaev and Gilbert Burns put on a fight of the year frontrunner.

The former middleweight champion greeted the question with a laugh, before answering:

“It would be tricky. I would be firing those kicks down the middle like you would not believe. I do not think my right foot would touch the mat. He’s a tough guy. I’ve fought wrestlers before, though; I fought Yoel Romero. He’s a silver medallist, granted, he’s not that sort of type of grappling game, but I guess that’s something really haven’t thought about and have to try and digest when we get their sort of thing.”

It’s not the first time Whittaker has been forced to talk about the rising star that is Chimaev. After Chimaev earned a hard-fought decision against Burns at UFC 273, Whittaker had some words of advice in regards to the damage Chimaev absorbed.

“There are bigger guys. You can’t get away with certain things. You can’t take those shots Burns delivered on him as a middleweight.” Whittaker said.

For now, Whittaker and Chimaev are separated by one weight class. Still, the idea of the two colliding doesn’t seem a million miles away due to Chimaev’s goal of becoming both welterweight and middleweight champion.

Whittaker is set to face Marvin Vettori in the co-main event of the UFC’s first event in Paris, France, after failing to defeat middleweight Israel Adesanya for the second time. Vettori finds himself in the same position. A loss for either man would cause a major setback in both fighters’ title aspirations.

Chimaev is yet to have his next move confirmed. However, has verbally agreed on Twitter to face Belal Muhammad at the UFC’s next Abu Dhabi event on Oct.22.

Do you think a fight between Robert Whittaker and Chimaev will ever materialize?