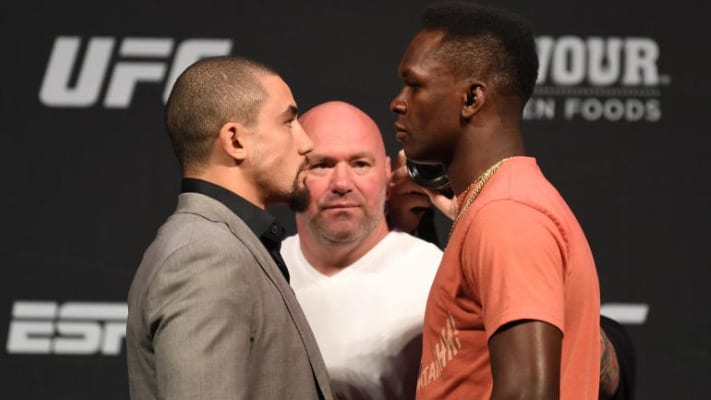 Former UFC middleweight champion Robert Whittaker has denied claims from Dana White that he is uninterested in a rematch with the man who dethroned him – Israel Adesanya.

Whittaker established himself as the middleweight number one contender when he beat Jared Canonnier by unanimous decision at UFC 254 on October 24. Just one week later at it appears ‘Stylebender’ is booked to fight Jan Blachowicz for the light-heavyweight title next.

White claims he only booked Adesanya vs. Blachowicz because Whittaker was uninterested in challenging for the 185lb title.

“I was like, ‘I’m going to have to sit down with this kid (Adesanya) and convince him on why he needs to fight Whittaker,’” White said at the UFC Vegas 12 post-fight press conference. “Whittaker comes out and says he doesn’t want to fight him – craziest (expletive) I’ve ever seen. … I thought Whittaker deserved the shot and Whittaker doesn’t want it, so yeah, we’ll let (Adesanya move up).”

‘The Reaper’ has now accused White of twisting his words. Whittaker claims he will be ready to fight in the first quarter of 2021 and is hoping he will square off against Adesanya.

“I certainly think he took a little twist to what I said,” Whittaker told MMA Junkie. “I never said I don’t want to fight Izzy. That’s not something I said. I did not say that. I’m looking to fight March, April next year. I would like to fight Izzy. If Izzy’s moving up to fight Jan, then I’ll move up and fight him there if he gets the win. I want that fight. I do want that fight. We just had to work it into that timeline.

“I have no control on what the UFC’s going to do or what Izzy’s going to do, but whether he’s here at middleweight or up at light heavyweight, I’ll take the fight him.”

Whittaker is not surprised to hear Adesanya is moving up to fight Blachowicz but was somewhat thrown by the fact no-one at the UFC had reached out to him.

“They never reached out to me – not once,” Whittaker said. “It wasn’t so much of a twist of Izzy fighting Jan. I can see why they would want to do that, why Izzy would want to do that, why the UFC would want it. I can see that happening. It’s more the twist or how he took my words. Either he misinterpreted it or twisted it a little bit. That one took me for a little bit of a ride. But like I said, my timeline stands. That is the fight that I’ve earned.”

Do you want to see Robert Whittaker rematch Israel Adesanya in 2021?