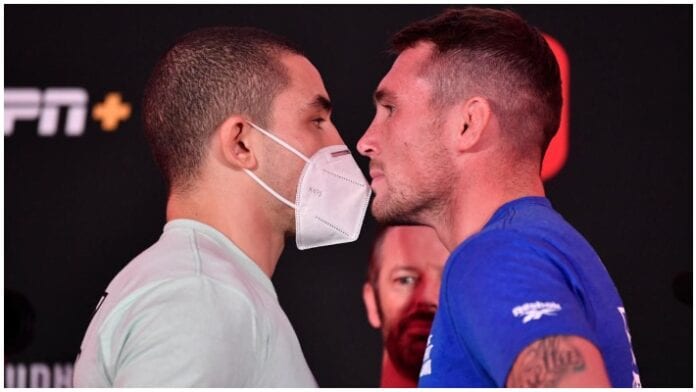 IT’S TIME! The UFC Fight Island 3 main event is finally upon us. Former middleweight champion, Robert Whittaker returns to the cage for the first time since surrendering his 185lb title to Israel Adesanya. The Aussie takes on Darren Till who is looking to make it two in a row since moving up from welterweight.

Round 1: Darren Til charges in from the off and eats a jab. Robert Whittaker lands another nice jab early. Both fighters clash and Whittaker ends up on the floor from an elbow. He looks hurts for a second and Till tries to dive on him. The former champ survives the barrage and gets back to his feet. Till is starting to get his strikes off. He lands a huge elbow and some nice left hands. The Englishman is getting loose. He’s throwing big punches and kicks – many of which are landing. Whittaker is starting to settle down now. He’s starting to get off his own offence now. Whittaker lands a big straight right hand. A low kick from the Aussie just before the bell sounds to end round one.

Round 2: Till over commits and is made to pay at the start of round two. Whittaker launches in with an overhand right and gets the knock down. He follows his opponent down. Till smartly closes the guard and is able to stifle the attack of Whittaker. Not for long though. Whittaker is landing big elbows and nasty ground and pound. The former champ lands three consecutive elbows. Till is eating them but not defending. He manages to get back to his feet and the fight goes back to the middle. Till looks busted up. Whittaker looks light on his feet. Till is following his opponent around the octagon, feinting a lot but not throwing. Every so often Whittaker throws something big to keep Till honest. Big head kick from Till, Whittaker blocks well but that sounded powerful. The rounds ends.

Round 3: Whittaker opens up with a big low leg kick. Till returns with a nice uppercut. Both men clearly respect the other. Lot’s of hesitation which is proceeded by explosive flurries – don’t blink! Till seems to have taken an eye poke. He’s blinking but waving on Whittaker at the same time. As the Aussie jumps in Till fires of a huge knee up the middle. Whittaker shoots for the takedown but quickly bails. Whittaker fakes the takedown but fires a overhand over the top which just misses. He again shoots but is easily shrugged off. ‘The Reaper’ continues to swing wild and Till remains composed as a very close round three draws to a close.

Round 4: Till more aggressive at the start of round four after telling his corner of an injury. Lot’s of feints from Whittaker who is trying to set traps. Till isn’t biting – at least not yet. Till lands several hard shots. Whittaker spins round and looks hurt for a second but quickly gets back to striking range. Whittaker shoots but is again stuffed easily. Straight left from Till. They clinch up. Till lands two knees. Whittaker scores with an uppercut on the exit. Till eats a right hand then dodges two more. Both men posture in the centre of the cage as the round ends.

Round 5: Whittaker throwing big early. Head kick following by a left hand from Till. One-two from Till which just catches the former champ who fires back with a leg kick. Whittaker shoots in and is again doesn’t get close but does land on the exit. Huge left down the middle from Till but Whittaker just eats it. Another level change from Whittaker who seems to be using the shot to land punches. Till lands a huge elbow which cuts Whittaker. Till takes an eye poke. Herb Dean stops the fight for a few seconds before they get back to it. Whittaker secures the take down and rides out the final moments of the fight in the top position