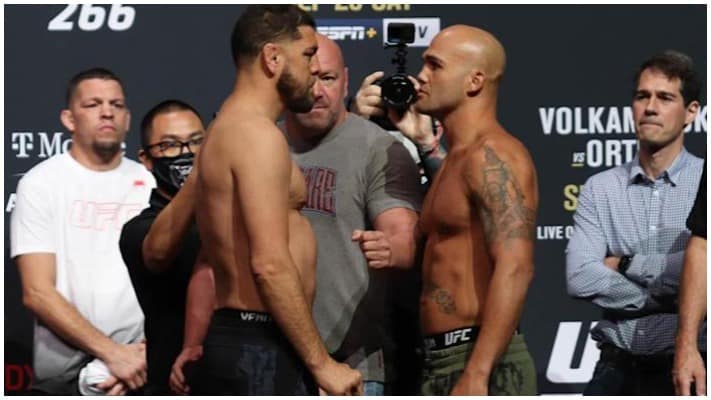 Up next, Nick Diaz and Robbie Lawler square off in a rematch 17 years in the making.

Round 1: Nick Diaz opens up with an acrobatic kick that misses big and leaves him vulnerable on the mat. Robbie Lawler is swarming him early with a ton of strikes, many of them are finding the target. Diaz survives the initial flurry and is now working his way into this fight. Diaz rips to the body. Lawler returns with his own body shot and a couple upstairs. They are trading at the midway point of round one. Lots of volume from Diaz. Not a lot of accuracy but some are getting through. Lawler has Diaz against the fence and is unloading but Diaz returns. What a first round this is! Diaz is leaning against inviting Lawler in and then returning with some slick shots. They trade right up until the horn sounds to bring the first frame to an end.

Round 2: Lawler pushes forward early. Diaz is doing great work going back. The former UFC champ is throwing bombs and appeared to hurt his opponent with a shot to the body. Lawler wasn’t able to jump on it and Diaz is letting his hands fly once again. Round two has been all about Lawler pressing forward without really taking advantage. Diaz is piecing him up against the fence. Just as I say that Lawler lands a couple of eye-catching shots. ‘Ruthless’ is starting to take over toward the end of round two. Punches in bunches. Diaz’s output has slowed and he’s not landing as often. A body shot seemed to hurt Diaz at the end of round two and Lawler puts his foot on the gas during the end of the stanza but is unable to follow up with anything clean.

Round 3: Lawler lands big early. Diaz returns! ‘Ruthless’ lands a shot that drops Diaz to his knees. He drops to his back and Lawler walks away. The referee tells Diaz to get up but it seems he cannot continue. This fight is over!