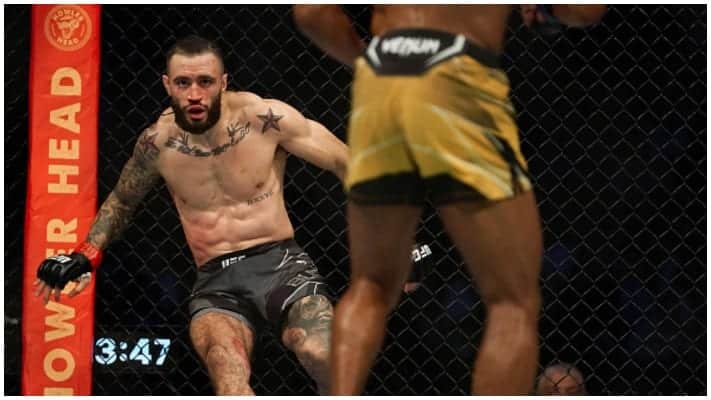 At UFC 262, Shane Burgos and Edson Barboza were having an amazing battle to open up the main card. In the third round, Barboza would hit Burgos with a clean right hand that he seemed to just brush off. About four seconds later, Burgos’ legs gave out, sending him backwards to the canvas. Barboza would then go and finish him about one minute into the third round. The delayed reaction was baffling and many suggested that Burgos was just to tough for his own good. Some of those people would appear to be right.

Dr. David Abbasi is a ringside physician and orthopedic surgeon who breaks down sports injuries on his YouTube channel. Following Saturday night, Dr. Abbasi posted a video explaining how the brain works during a KO and why Burgos’ is so strange. (H/T MMAFighting.com)

“First of all, anything that involves the brain is going to be complicated…,” Dr. Abbasi said. “The brain is enclosed within the skull and is surrounded by a layer of protective fluid called cerebrospinal fluid which basically acts to cushion and protect the brain when the head is shook so the brain is not swashing around on the inside of the head. Now with a knockout type blow like the one we saw Edson Barboza deliver, what can happen is that any sudden movements of the skull can cause the brain to knock around on the inside of the skull. When that happens you get a dump of increased electrical activity and imbalances of the electrical activity can sometimes cause what we consider a knockout, or basically shut down of the central nervous system and the body.”

“In this specific instance, we see a delayed reaction of that. Being a ringside physician, what we think happens is basically a clash of a person’s will power versus scientific ability to continue a fight. Almost like if you were to imagine someone at the end of a triathlon you see those people try to run or crawl across the finish line but their body physically cannot do it. I think there’s a component of that that we can consider was happening.”

Dr. Abbasi also suggests that Burgos’ head movement after absorbing the strike had something to do with it too.

“After he gets hit by the punch by Edson Barboza, at first he acts normally and actually we see him do his normal type of head movement back and forth which in my opinion probably made things worse because his brain was probably on the verge of electrical activity where it was going to shut down or have a knockout but it was just on that border”

“I think the addition of that head movement certainly did not help things. It could have increased the severity of that blow that Edson Barboza delivered. But I think that scientifically, probably what’s going on it was probably an intersection of extremely tough will power meeting the scientific verge of a knockout with the abnormal electrical activity.”

What was your reaction to Edson Barboza’s weird knockout of Shane Burgos?