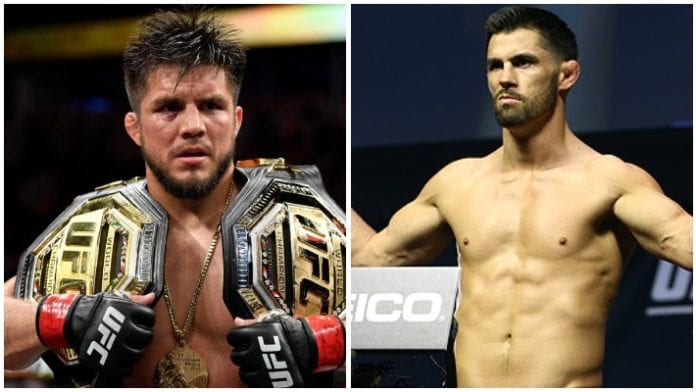 Former featherweight king Jose Aldo has been forced out of UFC 250. Dominick Cruz will now step in to face bantamweight champion Henry Cejudo on May 9.

Originally UFC 250 was due to go down at the Ginásio do Ibirapuera in São Paulo, Brazil. Earlier this week it was announced the stadium was to be turned into a field hospital during the COVID-19 pandemic meaning the event needed a new venue which will most likely be Stateside.

Combate reports the ongoing coronavirus pandemic has led to Aldo withdrawing from the fight as he is unable to travel to fight in America. Instead, former 135lb champion Dominick Cruz will step in and fight Henry Cejudo next month at a venue to be confirmed.

Cruz took to Twitter to seemingly confirm the report, he said. “Dear @HenryCejudo, The real king has already been told that we’re fighting May 9th. I’ll see you there.P.S. -Bring your other tiny lil friend @cptdasamericas so I can slap you both around.  ? ?  -Signed, Sealed, Delivered-.”

The 35-year-old hasn’t fought, due to persistent injury problems since losing his title to Cody Garbrandt at UFC 207 in 2016. Now those issues appear to be behind him and he has been looking to return to the octagon for quite some time. He was linked to fighting Cory Sandhagen and last week Cruz called out Petry Yan. Now though it looks like he’s got the biggest fight of them all, much sooner than anyone could have anticipated.

Cejudo has hit his MMA peak and is currently one of the biggest stars in the sport. He captured titles at flyweight and bantamweight making him one of a few fighters who have become dual weight UFC champions. Cejudo has beaten Demetrious Johnson, TJ Dillashaw, and Marlon Moraes during his epic run. He now seems intent on cashing in on his success.

The Olympic gold medallist received significant backlash for chasing a fight with Aldo despite the former 145lb champion having never won at 135lbs. Cruz will likely get a similar reaction from fight fans due to the fact he hasn’t competed in over four years.

With Jose Aldo out, is Henry Cejudo vs. Dominick Cruz the best fight to make for UFC 250?