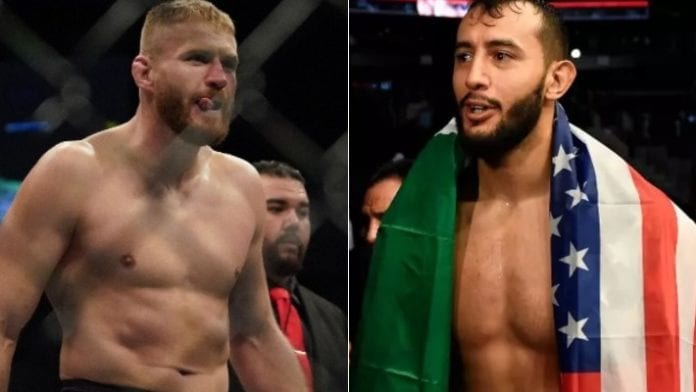 Dominick Reyes and Jan Blachowicz are seemingly set to battle for the vacant light heavyweight title.

It was reported by ESPN’s Brett Okamoto earlier on Monday that a contest between the pair was in the works for UFC 253 which takes place September 26.

At the time, it wasn’t clear whether it was a non-title, interim or title bout as the UFC was still figuring out the situation with Jon Jones.

“Breaking: A 205-pound fight between Dominick Reyes (@DomReyes) and Jan Blachowicz (@JanBlachowicz) is in the works for Sept. 26. The fight is nearly agreed to, but the stakes are being worked out. UFC is working with current champ Jon Jones right now to figure out his next move.”

However, with Jones later officially vacating his 205-pound crown, it appears we may have our answer.

Reyes is coming off a controversial but close unanimous decision defeat to Jones in their title fight at UFC 247 back in February. It was his first career defeat as he has heavily campaigned for a rematch since.

Blachowicz, meanwhile, is on a three-fight winning streak following his recent knockout of Corey Anderson. In total, he has also won seven of his last eight outings.

UFC 253 will be headlined by a middleweight title bout between Israel Adesanya and Paulo Costa. That means we could be set for a double header with two title fights taking place on the night.

What do you make of this fight? Who comes out on top?