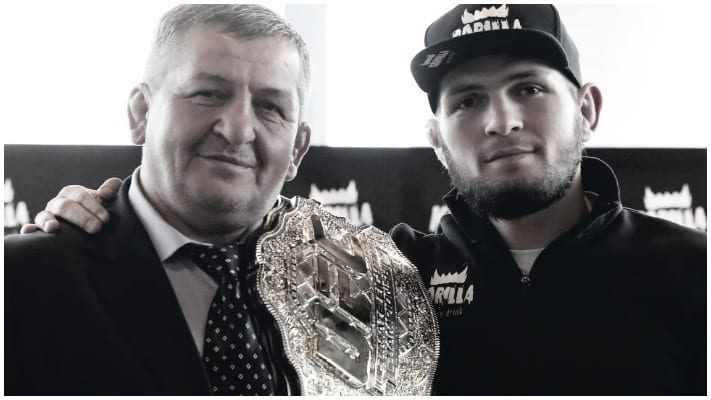 Abdulmanap Nurmagomedov, the father of UFC lightweight champion Khabib Nurmagomedov has died aged 57 due to complications stemming from catching the coronavirus according to reports. Russia Today reports Nurmagomedov Sr. died on Friday after being informed by Chechen Republic leader and friend of the family Ramzan Kadyrov.

Nurmangomedov first fell ill in April with pneumonia-like symptoms but COVID-19 was not confirmed. The renowned MMA coach told media he was feeling fine after his health scare but then his condition quickly deteriorated. Nurmagomedov was sent to a Russian military hospital for further treatment, it was there he tested positive for the coronavirus before suffering a heart attack brought on by the disease.

Abdulmanap underwent heart surgery and was placed into a medically-induced coma. The 57-year-old eventually awoke from the coma but was struggling to speak. On June 23 Khabib Nurmagomedov provided the following update on his father’s health, he said.

“I visit him, he recognizes me, but there’s no communication because he’s connected to [medical] devices. Every day they let me in, I spend half an hour [with him], I hold his hand. When I ask: ‘Father, do you recognize me?’ He gestures and lets me know.”

READ:  Aussies Know How To Punch- MMA Fighting and Boxing in Australia

“These are some of the best doctors in the world… I have no concerns [about my father’s care], many thanks to them. In that respect, all’s well. It takes time, because the consequences are very difficult, and the rehabilitation period will be long and tough.”

Everyone at LowKickMMA sends our condolences to the Nurmagomedov family at this difficult time.