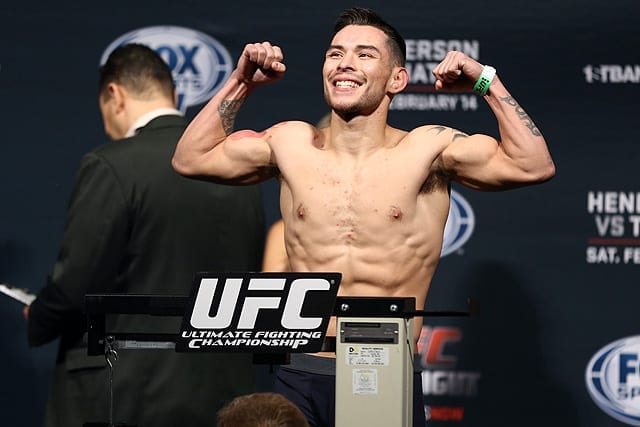 The main card of UFC 207 began with a flyweight bout between Louis Smolka (11-3) and the newest addition to the Jackson-Wink MMA team, Ray Borg (10-2).

Smolka showed heart, but this one was never close.

Yesterday morning, “The Tazmexican Devil” failed to make weight and missed the 126-pound mark by three and a half pounds. He will forfeit 20 percent of his purse to “Da Last Samurai.”

Smolka established distance early with his jab. Borg tied his opponent up and landed a knee to the body. Smolka grabbed a leg, but they separated. Borg missed a lunging kick, but earned top control when his opponent went for a back. He locked in a D’arce choke and used it to move to Smolka’s back. Borg returned to side control. They stood up, but “The Tazmexican Devil” slammed his opponent back down.

Borg achieved full mount on a bloody Smolka. He trapped his opponent’s arm in an omoplata position. Borg took the back of Smolka and landed a hard punch and a knee to the body. The round ended with Borg in full guard.

Borg was aggressive in the second round with kicks. Borg got a hold of “Da Last Samurai” and the two scrambled on the ground. Borg wound up in side control. He mounted Smolka, but “Da Last Samurai” went for a leg lock. Borg avoided danger by dropping a big punch and returned to side control. He threatened with an arm triangle. Smolka went for a guillotine choke, but he wasn’t close to doing any damage. The round came to a close with Smolka attempting an armbar.

At the end of the round, Borg told his corner he thought he broke his ankle but didn’t appear to be limping.

Borg moved to the clinch at the start of the final frame and pushed his opponent to the fence. “The Tazmexican Devil” brought Smolka down. He locked in an arm triangle, but let go of it. The two returned to the feet. A step in elbow for Smolka landed. Borg went for a spinning elbow and the round ended shortly after.

All three judges scored the fight for Borg.