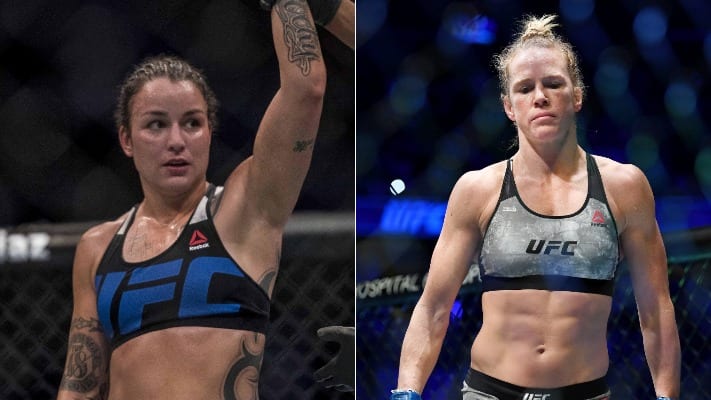 Unfortunately, Holly Holm will not be returning to Australia this weekend to rematch Raquel Pennington at UFC 243.

Initially, the two women’s bantamweights were scheduled to go head-to-head on the pay-per-view (PPV) before Holm was forced to pull out with an injury. Now, according to a post from Pennington on Twitter, the fight with Holm will be rescheduled for a later date.

“Just want to say thanks to all my supporters unfortunately upon arrival in Australia I found out that my opponent pulled from the fight due to injury. The fight will be rescheduled so until then I’m going to enjoy this delicious donut and explore the land down under.”

Holm recently took to Instagram to comment on her injury, detailing that she will not need surgery, but will rehab in order to get back into fight shape and ready to fight once again.

“If you don’t know, I have been injured and I cannot fight in Australia,” Holm said in an Instagram video. “Something that is super heavy on my heart and I’m super bummed out about. [To] go through a whole training camp and not be able to make it to the fight. And not just for me, this is a training camp for Raquel Pennington as well, my opponent, who I have a lot of respect for.

“I don’t know the scientific terms, but the ligament or the tendon that attaches my hamstring to my bone, I tore 30 percent of it this last week in training. The good news is I don’t need surgery, but one week’s not enough time to be ready to fight. So I’ll be rehabbing it and be back at it soon and I will let you guys know when we get this fight rescheduled. Thanks again for all the love.”

What do you think about Pennington and Holm rematching at a later date?