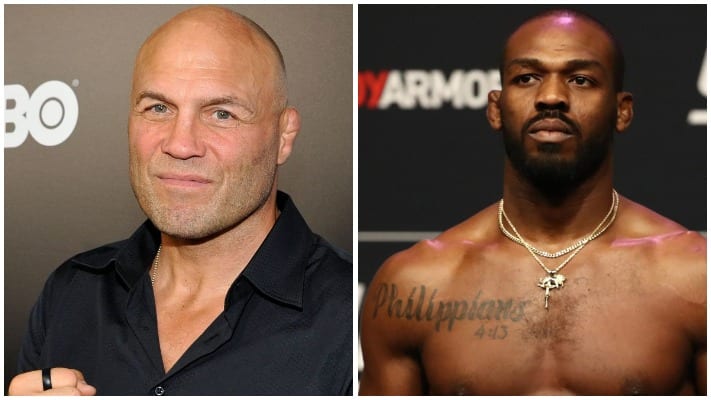 UFC legend Randy Couture thinks Jon Jones is unquestionably the greatest MMA fighter of all time if he steps up to heavyweight and wins the title.

The G.O.A.T debate has been raging recently. UFC lightweight champion Khabib Nurmagomedov choked out Justin Gaethje inside two rounds at UFC 254 this past weekend before retiring from the sport with a perfect record of 29-0.

Many fans believe the undefeated Russian fighter is the best of all-time. Jones has been adamant that this isn’t the case. ‘Bones’ has been campaigning on social media for recognition as the greatest, after being dethroned as the pound-for-pound number one on the official UFC rankings.

Couture earned his place in the UFC Hall of Fame by securing championship status at light-heavyweight and heavyweight. The 57-year-old now tells TMZ Sports that Jones must do the same in order to cement his status as the greatest.

“I think Jon Jones is right there. I think if Jon really wants to solidify himself as pound-for-pound, he needs to go up to heavyweight and he needs to take a shot at winning that title,” Couture said. “And, then that erases any argument that anybody could have. He’s a two-division champ. He’s been dominant in the light heavyweight division for a long time now.”

“I think that’s something that Jones needs to look at, and really solidly his legacy in the sport by going up and winning the heavyweight division and showing just how technically proficient and athletic he is.”

Jones relinquished his 205lb belt earlier this year and announced his intention to compete at heavyweight moving forward. Feared knockout artist Francis Ngannous has had repeated assurances that he is next in line for a shot at current heavyweight king Stipe Miocic. Earlier this week it was revealed that match-up was being targeted for March 2021. So it looks like Jones may have a wait before he can claim a belt in a second UFC weight class and cement his GOAT status.

Do you agree with Randy Couture? Does Jon Jones cement his GOAT status by winning the UFC heavyweight title?