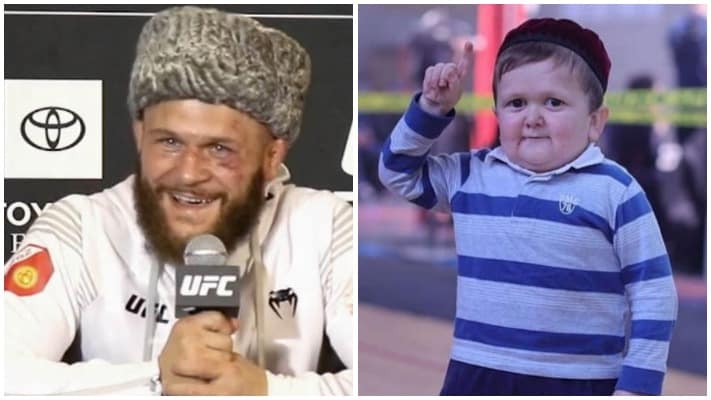 Rafael Fiziev had a very unusual callout at UFC 265.

Fiziev made it four wins in a row after a three-round war with Bobby Green on the featured prelim of the UFC 265 pay-per-view event last night.

Despite Green turning things up a notch in the third and final round, Fiziev did more than enough in the first two rounds to carve out the unanimous decision win.

And rather than shoot his shot and call out a higher-ranked lightweight in his post-fight interview, Fiziev instead decided to call out internet sensation Hasbulla.

“Hasbulla… if you want money fight, you fight me with bro!”

Hasbulla has notably called for a fight with Henry Cejudo in the past with the latter — who was also receptive to the fight in a joking manner — believing he is more than capable of becoming a true global star.

“He wants to come over to the US Hasbulla has big plans. He wants to fight in Vegas. He’s been sending me messages, so we’ll see,” Cejudo said. “I don’t take myself too seriously. It is what it is. Even my girl is like four inches taller than me too… It’s just the sense of humour. I’m looking for different ways to troll. I see the business aspect, the business side of it.”

“I can see Hasbulla becoming a huge recognisable public figure across the world. If Hasbulla plays his cards right, he could be one of the most recognised faces in the world because how can you not like that guy. The dude has… I don’t what the syndrome is but he’s 18 or 19 years old, but it looks like he is five or six.”

Hasbulla is certainly on his way there if he’s already getting called out by UFC fighters.