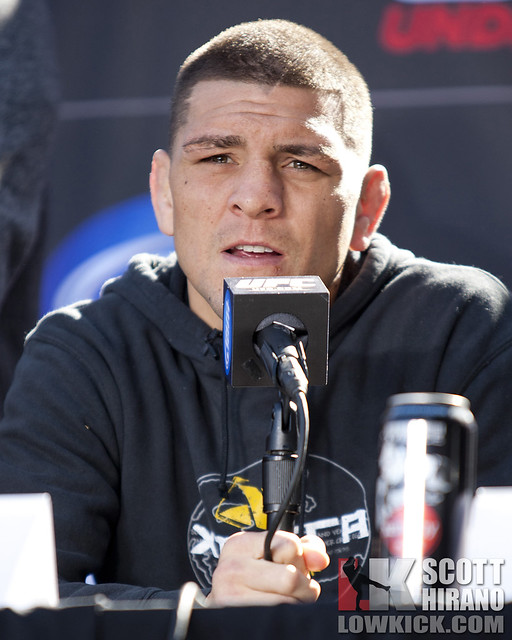 Nick Diaz lost a hotly contested decision Saturday night to Carlos Condit. This no doubt has thrown the dynamo for a loop considering he would have had a date with GSP lined up had he taken the win (and the interim title). In fact, he seemed so disgusted with fighting after the way he lost the match that he subsequently retired from MMA. Knowing his history of brash decisions we are only left to hope that he goes back on that plan, and keeps scrapping.

If Cesar Gracie is able to talk his brooding brawler into staying in the hurt business there is a wealth of opponents available for Nick to bounce back against. Top contenders to prospects on the precipice of title contention await the Stockton psycho. Even a few opportunities in boxing would quench this writer’s thirst to see Diaz in a combat sport.

Here are some decent opportunities for Diaz to get back on track (or fall further away from the limelight):

The pre-fight smack talking from both fighters should be enough for anybody to want these two motor mouths matched up. Koscheck might be the only person in MMA outside of Chael Sonnen that could hang with Diaz in the banter department. This would be a fight between two former title challengers, and the winner would be more than ready for a shot at interim champ Carlos Condit. It could also go a long way in answering the question of how Diaz reacts to a top tier wrestling game (since he hasn’t needed to in close to 6 years).

Nick Diaz fights on anger. It is his main motivation when it comes to entering the Octagon on fight night (not a career motivator). What better way to get his blood boiling then pitting him against the kid (he’s still just 22 years old) that treated his little brother like a rag doll when they fought last year? Rory would be a bit of a step down for Diaz, but make no mistake it would not be an easy fight for him.

TUF season one winner, Diego Sanchez, first took on Nick back in 2005. He planted the “Loose Cannon from Lodi” (last one I promise) on his back routinely over the 3 rounds they fought. However, Diaz was never in any serious trouble and spent the majority of the pre-fight and post-fight saying not so nice things about “The Nightmare”. It would be quite interesting to see how much both evolved in a rematch seven years after the original.

I’ve been saying this for close to three years now; Nick Diaz has the best boxing in MMA. He judges distance like nobody in the sport. His power is grossly underrated.  He attacks the body with unmatched tenacity. His head movement keeps him away from strong counters, and his chin is made of the same metal fused with Wolverine’s skeleton. If Nick needs to find something to get excited about after losing out on a huge opportunity, he should look no further than the squared circle. I’m sure there are a few guys in boxing that would love to shut Diaz’s mouth, and in my humble opinion, the fan reaction to the first top tier MMA fighter taking part in a boxing match (with a top 20 caliber guy) would be through the roof. Guys like Librado Andrade and Ricardo Mayorga would be perfect for Diaz.