LowKickMMA.com
Home Polls Poll: Who Should Brock Lesnar Fight In His UFC Return? 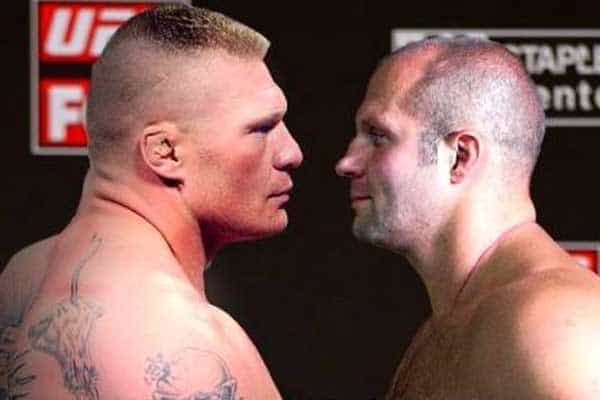 Last night (June 4, 2016) huge news dropped during that former heavyweight champion Brock Lesnar was supposedly close to a UFC return, and that rumor was indeed confirmed during UFC 199 from California when a scintillating UFC 200 promo video played with Lesnar surprisingly showing up at the very end.

Speculation understandably began ramping up as to just whom Lesnar would meet in the co-main event of July 9’s blockbuster UFC 200 spectacular from Las Vegas’ all-new T-Mobile Arena, and indeed a host of interesting names await the polarizing behemoth who was last seen in the UFC way back in late 2011.

But Emelianenko recently returned to the cage in Japan’s Rizin FC, and he’s also slated to face UFC veteran Fabio Maldonado at a Fight Nights event from St. Petersburg, Russia on June 17. Although he’s repeatedly teased making his way to the UFC lately, a deal with Emelianenko to face Lesnar seems highly unlikely at this point. Nevertheless, it would be beyond huge.

Other opponents include Mark Hunt, who was reportedly told to “be ready” for UFC 200 by White, and Shane Carwin, the former contender who famously took Lesnar to the limit at July 2010’s UFC 116 before ultimately succumbing to a second-round submission. Carwin also recently teased a potential return and said he would take the fight on social media last night.

Rounding out the top candidates, longtime heavyweight mainstay Josh Barnett also called out for the bout in a pairing that seems much more unlikely.

Who do you think Lesnar should face in his return? Cast your vote in our poll below!