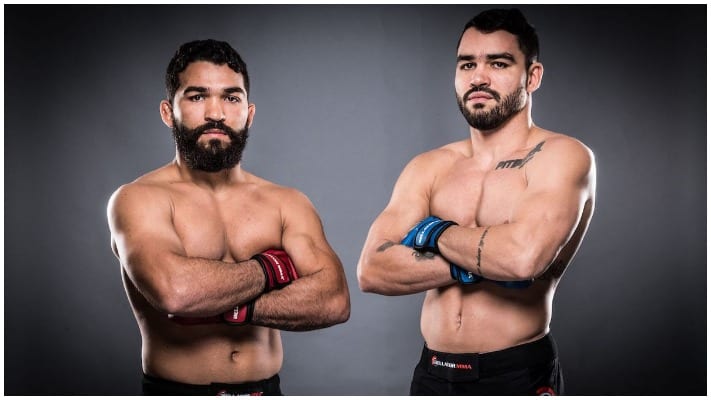 Dual-weight Bellator champion Patricio Freire has got into an online spat with UFC featherweight king Alexander Volkanovski as the pair hype up a possible cross-promotion fight.

The beef began with Freire responding to UFC president Dana White’s disregard for the talent possessed by Bellator. ‘Pitbull’ took to social media to bet White he would be able to take out his current 145lb and 155lb champions, he wrote.

“Hi @danawhite I’m the one who destroyed steroids machine @MikeChandlerMMA, whom you said deserves a talk, in 61 seconds. If you send some of your top fighters to @BellatorMMA I can do the same to them too. Let’s bet like you did with PRIDE.”

Volkanovski saw the proposal from ‘Pitbull’ and advised his boss to accept the bet and allow him to make some easy money.

“Easiest money you will ever make @danawhite, let’s make it happen,” Volkanovski wrote.

Freire took aim at Volkanovski in a couple of tweet. ‘Pitbull’ threatened to knock out and hospitalize ‘The Great’ while also insinuating his rival should have lost the featherweight title to Max Holloway at UFC 251, he wrote.

“I’ll remember those words after I knock you out. Put your money where your mouth is @danawhite @ufc. Let’s go @ScottCoker @BellatorMMA” @alexvolkanovski

“just so u know U are fighting Pitbull the fighter not the rapper. I’m glad u recovered from ur cauliflower pussy. @danawhite it wud be my pleasure 2take ur $, I’ll even pay 4 Alex The Average’s hospital bills. It wud B an Honor to wear Max Holloway’s Belt. #LFG”

It wasn’t long before Patricky Freire jumped in and offered to fight Dan Hooker on the same card his brother fights Volkanovski.

Hooker seemed uninterested in fighting Patricky and joked about his would-be opponents height in his reply, he wrote.

“What are the rules for our fight? Are you going to stand on a chair or do I fight from my knees?”

Do you want to see Patricio and Patricky Freire fight in the UFC?