LowKickMMA.com
Home MMA News Pettis Wants Belt Back, But Would Move Down To Fight McGregor 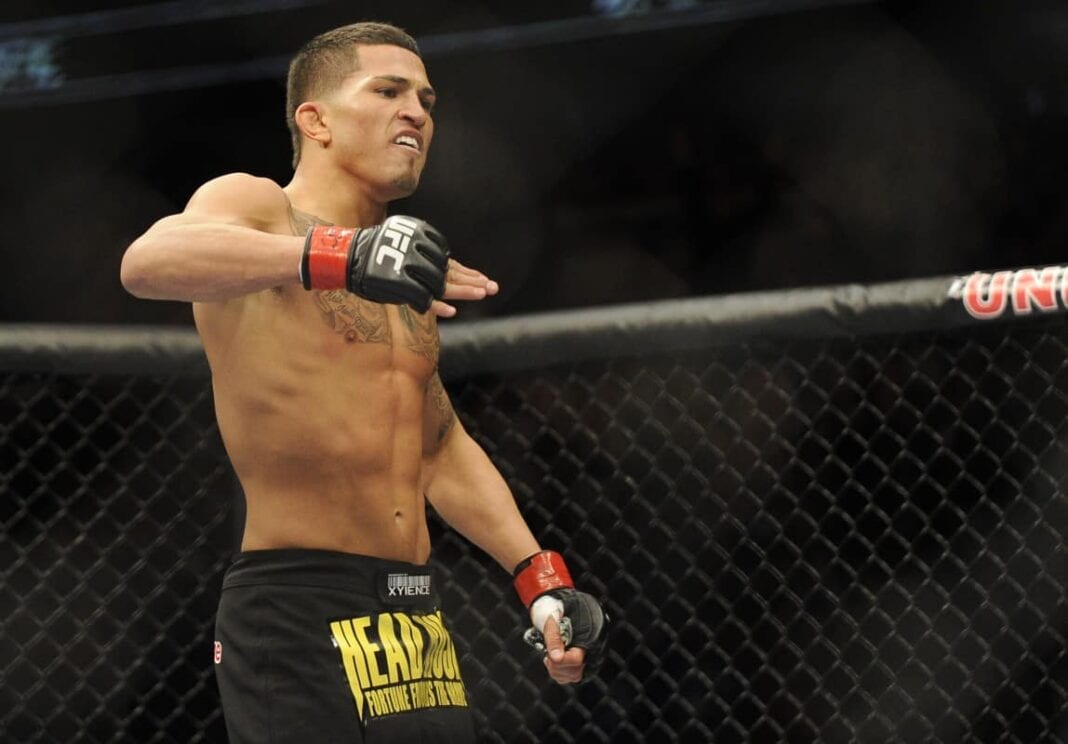 Former UFC lightweight champion Anthony “Showtime” Pettis is finally set to make his return from injury as it was previously announced that he would be taking on former Bellator champion Eddie Alvarez at January’s UFC Fight Night 81.

Pettis has been out of action since he lost his belt last March when he was destroyed by current champion Rafael dos Anjos. As of now, Pettis wants to get back into the cage and get his belt back, claiming that he wasn’t himself when he met RDA:

“For me, it’s just a comeback fight. I want to compete and get my belt back,” Pettis told GNP1.de. “I was on top of the world, had a bad performance. That wasn’t me in that fight, you know? I feel like, if that fight would have happened ten times, nine out of ten I would have beat him. It was just that one day that I was off, I wasn’t myself.”

However, “Showtime” isn’t looking passed Alvarez, admitting that the “Silent Assassin” is a veteran, and a dangerous opponent:

“I think Eddie’s tough, he has great hands, he’s been around for a long time, he’s been in five-round fights, so we know, he has the gas tank, the ability to compete at the highest level.”

Being one of the most exciting fighters in all of mixed martial arts, Pettis’ name has always been thrown around with the idea of super fights, and he was actually scheduled to meet reigning featherweight champion Jose Aldo years back, but the bout fell through.

Pettis said that he would move down if there were some big money fights, which of course led to speaking about interim 145-pound champ Conor McGregor, who has deemed himself as the “money fight” for all male fighters.

McGregor, who is set to meet Aldo in December, said that after he beats Aldo, he will move up to lightweight and take out the division. “Showtime” said that the Irishmen has done a good job of marketing himself, but that he’s crazy to believe he would destroy the UFC’s best 155-pounders:

“It’s all talk until it happens man. He talks well, he’s doing a great job for his weight class. I mean, there would be no big money fights in featherweight, besides… that’s why I was gonna move down there. Me and Aldo was gonna be a big money fight for Aldo, but now with Conor McGregor in there, talking himself up, making himself marketable. Good for him doing that, but lightweight is a whole different place. It’s not featherweight. Featherweight is… I mean, besides Aldo, there’s not much…, I mean, there is talent, Frankie Edgar, Chad Mendes, (but) lightweight is the deepest division in the UFC, it’s a totally different story. For him to say, he’s gonna come up there and walk through everybody, it’s crazy. He’s only beat Chad Mendes, one guy in the featherweight class that’s top five.”

That doesn’t mean Pettis wouldn’t fight McGregor, however, saying that if that’s what the fans want then he would move down to featherweight. Although at the end of the day, “Showtime” has his eyes on his previously held lightweight title:

“Yeah, for sure. I mean, featherweight has always been an option. I want my belt back, that’s my main goal. You know, I’m doing well financially, I’m not hurting at all. So for me, the goal right now is getting my belt back. What happens after that fight, we’ll see. People wanna see McGregor, I fight McGregor, people wanna see Aldo, I fight Aldo, that’s what it’s all about.”

Would you be interested in seeing “Showtime” meet the “Notorious” one?