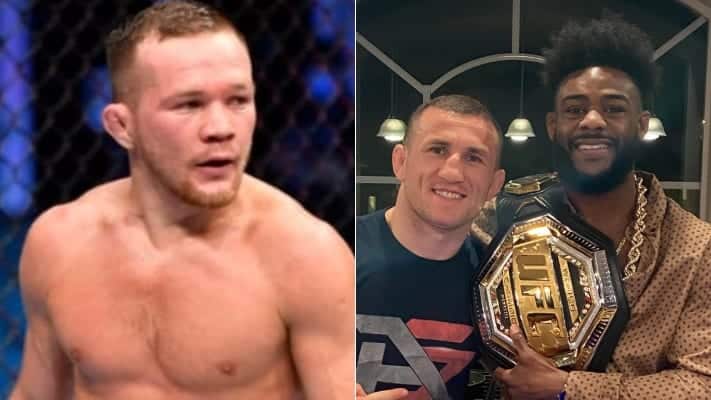 It took a day for Petr Yan to change his tune on Aljamain Sterling.

Sterling became the new bantamweight champion at UFC 259 last night after Yan was disqualified for an illegal knee during the fourth round of their title fight.

It was an unfortunate end to a great fight, especially as Yan looked well on his way to winning the contest. The Russian would apologize for his actions on social media soon after and wished Sterling a quick recovery.

However, despite Sterling claiming that wasn’t the way he wanted to win the title and leaving the belt in the Octagon, he was later seen posing with it in a photo posted by teammate Merab Dvalishvili.

Yan certainly didn’t appreciate that as he responded soon after.

On Instagram, he would also call Sterling a clown to which Dvalishvili responded.

Sterling would also respond to the former champion.

“@PetrYanUFC please allow me to cleanly knee you in the temple, while you aren’t looking! See how much of a “clown” I would be then. I can admit RD 4 you were starting to land more shots, but the fight was statistically close, despite me fatiguing early. The clown here is you.”

Ironically, Sterling still claimed he didn’t feel like a champion despite posing with the belt.

“Thanks, but I don’t feel like a champ yet until we do it again,” he responded to a fan.

The quickest solution? Run things back.

What do you make of Sterling posing with the belt?