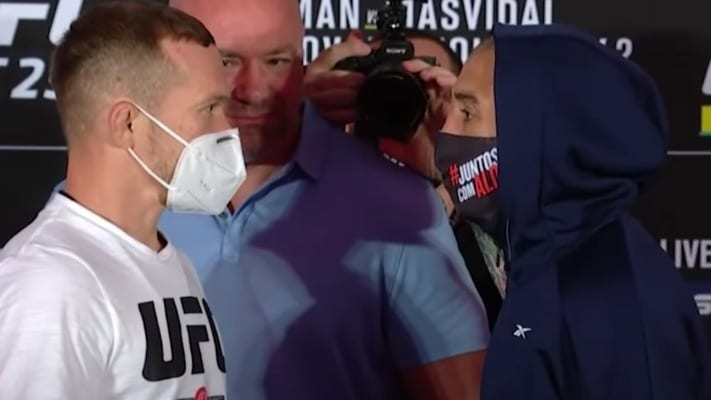 Next up on the UFC 251 main card is a title fight for the vacant bantamweight strap between Petr Yan and Jose Aldo.

Round 3: Aldo lands two nice body kicks. Both men starting to exchange more. Aldo lands nice body shots. He continues to rip the body. He lands an uppercut and Yan responds with a calf kick. Yan seems to be hurt as Aldo charges forward but “No Mercy” seems to be fine in the end. Yan lands a nice uppercut. Aldo lands a knee to the body. Yan responds with some jabs. Aldo lands a body shot. Yan respond with some body shots of his own. Aldo shows great head movement. Yan is landing a bit more but Aldo is also dodging plenty of strikes. Yan lands a body kick. A very even round.

Round 4: Aldo comes out with strikes in the fourth round. Aldo lands a body kick. Yan lands a straight left. They clinch up before separating. Yan lands a leg kick and follows with a stinging body kick. Aldo lands a body shot. Aldo lands another but Yan counters with a big strike. Aldo lands a big knee to the stomach. They are exchanging a lot more strikes as they go toe to toe. Yan nearly trips Aldo but Aldo stays on his feet. Aldo might be slowing down as he usually does in the championship rounds. However, he has just surpassed his most significant strikes in a fight (102). Aldo is bleeding from his nose, however. Yan is advancing and landing more. Yan lands two huge uppercuts before tripping Aldo. Yan looks to finish the fight with ground and pound but is in Aldo’s guard. Yan gets up and lands some nice strikes. However, Aldo survives. Clearly a Yan round.

Round 5: Yan lands a huge 1-2 that has Aldo hurt. Aldo goes to the ground but is still in this. Aldo retains half-guard. Yan has Aldo’s right arm trapped and lands a number of big strikes and elbows. Yan looks to get the crucifix position but Aldo is still surviving. Aldo is bleeding badly. Yan is landing plenty of ground and pound. Aldo isn’t fighting back. The referee isn’t stopping this for some reason. Finally, the referee stops it. Yan is the new bantamweight champion.