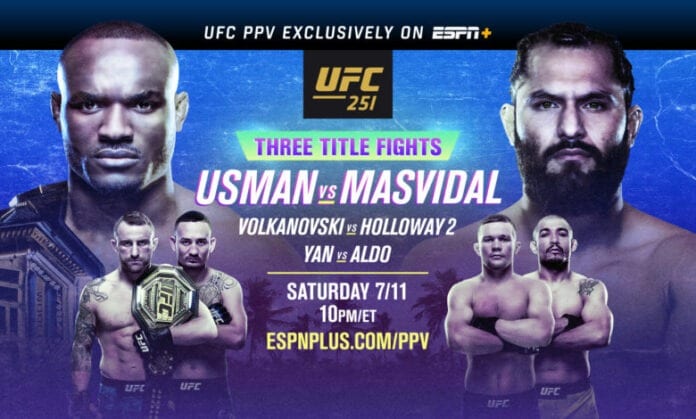 In the main event of the evening, we will see Kamaru Usman attempt to defend his Welterweight title against rising star Jorge Masvidal. After being originally scheduled to face Gilbert Burns, illness forced a switch in opponents that saw Masvidal step in to fight on six days’ notice. In the co-main event, we will see the rematch between featherweight champion Alexander Vokanvoski and Max Holloway. In their first bout, Volkanovski got a unanimous decision victory so in this matchup Holloway is looking to take back his belt from the Australian champion. The third title on the line at UFC 251 is the vacant bantamweight title. This will be contested between Petr Yan and Jose Aldo. Outside of the title fights, there are also many other big names on the card including Rose Namajunas, Paige Vanzant, and Volkan Ozedemir.

Check out our UFC 251 results below. Also, make sure to follow along with us on twitter @LowKick_MMA