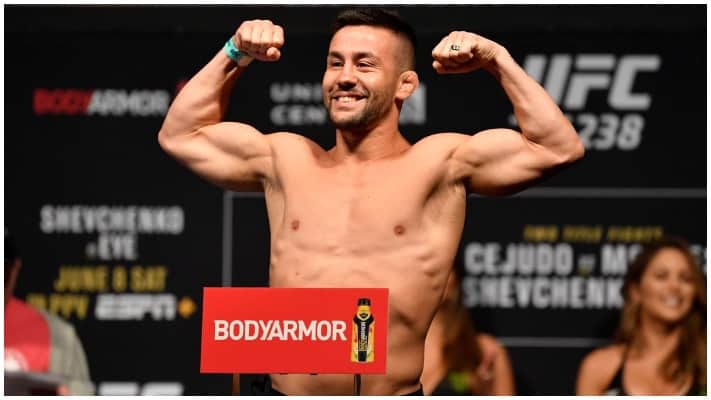 Pedro Munhoz is currently contemplating his next move.

The Brazilian bantamweight was easily dealt with by Jose Aldo over three rounds at UFC 265.

At 34-years-old, Munhoz is a pivotal point in his career. It’s clear he is one of the better bantamweights on the UFC roster but a recent record of one win and three defeats from his last four fights shows he struggling against the best 135lb fighters.

In a recent interview with AG Fight, Munhoz revealed after squaring off the former featherweight champion, Aldo, he is considering moving down to 125lbs.

“It was something that after the fight and I analyzed the fact that Aldo had fought a long time at featherweight and, with a professional team behind him, and he did a great job,” Munhoz said. “He kept the blast and strength, but he went down well and the most important fact is that the recovery was good. This made me think about this possibility (to go down in weight category). I want to see what the next steps will be, who will offer me, but it is a possibility that I do not rule out”, said the Brazilian, without making any predictions for the change.

“I always had a quiet time to beat bantamweight, so if I go down to flyweight, this diet time would be longer and more regulated, which for me is fine,” Munhoz added. “There comes a time when we need to chart a new path, so there is (this chance). I don’t know if in the next (fight) or in two. But I think so,”

Munhoz’s move to flyweight could be triggered by the fact he’s pretty happy with his performance at UFC 265. He says he gave his best and was simply beaten by the better man on the night.

“I don’t have frustration (with the defeat),” Munhoz said. “I did my best. It was a great fight we did, with three rounds of great entertainment, with a lot of technique and giving a show to the guys. I was happy with the performance and I was happy for his victory too. I have fighters I admire and he is one of them. Unlike Frankie (Edgar), who ran a lot, Aldo faced big situations in the fight. I felt that I connected good blows to him and he had a good absorption power, so the credit is all his.”

Do you think Pedro Munhoz should drop down to flyweight?