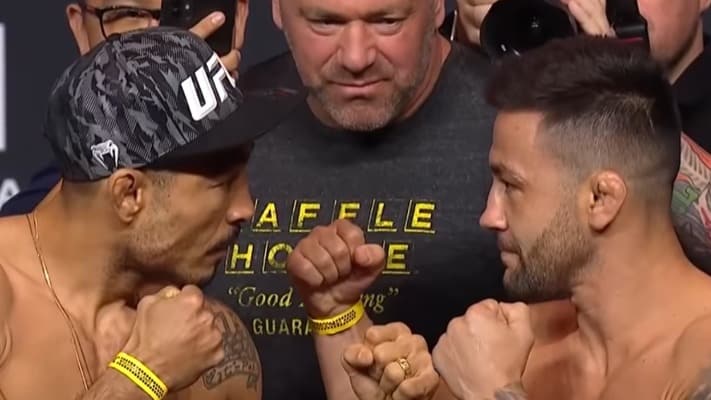 UFC 265 is upon us with a co-main event that features two of the best strikers in the UFC’s bantamweight division, Jose Aldo and Pedro Munhoz. Both fighters are looking to earn a statement win and stick out in the crowd in the absolutely stacked bantamweight rankings.

Aldo and Munhoz start the action in the middle of the octagon. Munhoz starts the action with a hard body kick followed up by a low calf kick. Both fighters trade stiff jabs. Munhoz throws another low body kick that Aldo counters with a hard right hand. Aldo lands a right hand on the body that forces Munhoz back. Aldo checks another kick from Munhoz. Aldo lands a nasty right knee to Munhoz’s head, momentarily wobbling him. Munhoz lands a hard right hand that forces Aldo off the fence. Aldo goes with the right uppercut off of the lead hand of Munhoz. Aldo shows off terrific head movement off a 1-2 combo from Munhoz. With a minute left, the two trade hard strikes in the center of the cage. Aldo lands another hard body shot with a kick followed by an uppercut with just seconds left in the opening round.

The second round opens up with a pair of hard jabs by Aldo, and Munhoz counters with a left hook. Aldo lands a hard right low kick that Munhoz doesn’t check. Aldo begins working the jab off of Munhoz’s right hand and right kick combo. Aldo digs a couple of hard jabs to the body. Munhoz tries to get in the clinch and nearly lands a big right hand on Aldo’s forehead. Munhoz lands a brilliant combination off a right low kick followed by a right hook that stuns Aldo. Aldo raises guard and checks a pair of right-calf kicks from Munhoz. Aldo and Munhoz both eclipse 100 total strikes midway through the round. With a minute left in the round, Aldo lands a couple of hard hooks to the body followed by a jab up top. Both fighters seem content in making it a stand-up-only fight heading to the third and final round.

Aldo and Munhoz share an embrace in the center of the octagon in the opening seconds of the round. Aldo showcases electric hand speed with a flurry of strikes to the body off the fence. Munhoz continues to press forward and feels comfortable dictating the pace. Munhoz attempts to move into the clinch but Aldo pushes off quickly. Aldo lands a blistering fast triple-jab combo that wobbles Munhoz midway through the round. Aldo stuns Munhoz with a big right hand that appears to stun him, getting a reaction from the crowd. Aldo lands a brutal left kick that briefly drops Munhoz, but Munhoz makes his way back up to his feet. Munhoz’s left eye begins to swell with just under two minutes left. Munhoz attempts another spinning leg kick that misses badly near the fence. Aldo’s hand speed keeps up with a solid 1-2 up top. The round ends with Aldo landing a hard left calf kick followed up by a quick 1-2 combination to Munhoz. The fight ends and the two embrace after a wild chess match in the octagon.