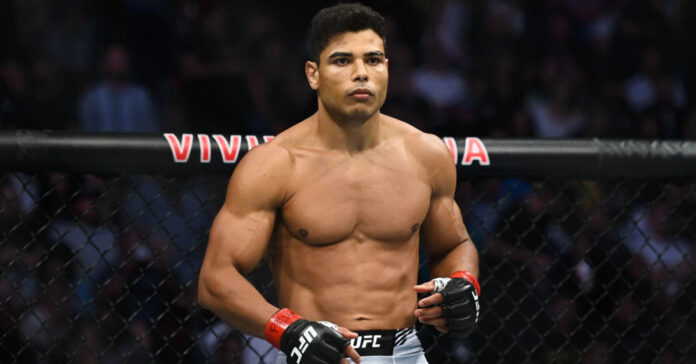 One-time UFC middleweight title challenger, Paulo Costa has teased an impending move to the squared circle, labelling his current contract with the Dana White-led organization, as “miserable” claiming it will “expire in time”.

Costa, the current #6 ranked middleweight contender, is currently scheduled to feature at UFC 284 in February next year in Perth, Australia – tangling with former undisputed middleweight champion, Robert Whittaker in a main card fight.

Last time out, the Belo Horizonte native made his return to the middleweight limit following an impromptu fight at light heavyweight, defeating former champion, Luke Rockhold in a unanimous decision victory at UFC 278 back in August.

Teasing a move to boxing in the near future, Paulo Costa claimed his “miserable” contract with the UFC will “expire in time” – with the Brazilian voicing his displeasure with how much fighters on the promotion’s roster were earning compared to YouTuber and recent winner, Jake Paul.

“My miserable contract with the UFC was up in a few short months,” Paulo Costa tweeted. “Will expire in time. A new #boxer is coming to town! (raised hands emoji)”

14-2 as a professional, Costa, an Ultimate Fighter alum and former Jungle Fight middleweight champion, has suffered middleweight defeats to both Marvin Vettori, and in his first professional loss, dropped a second round knockout loss to division champion, Israel Adesanya.

Amongst his list of other UFC victories, the Brazilian has defeated former welterweight champion, Johny Hendricks, as well as the recently retired, Uriah Hall – and perennial middleweight contender, Yoel Romero to name a few.

Revealing post-UFC 278 how he retained just a single fight on his current Octagon deal, Costa also claimed he earned in the region of $35,000 for his light heavyweight main event with Vettori in August of last year, after he missed the middleweight limit – forcing an impromptu 205lbs headliner. Costa also expressed his excitement at the thought of becoming a free agent following the booking of his final contracted fight.