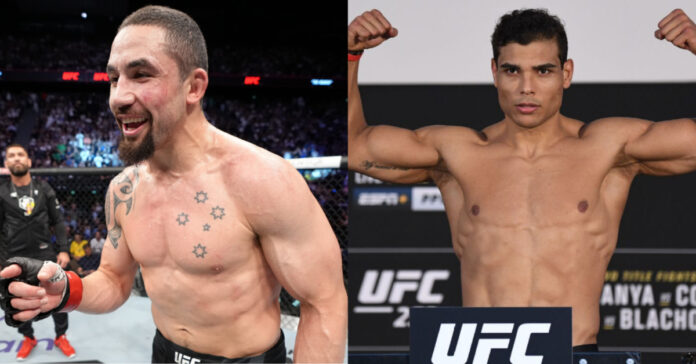 The UFC recently announced that Robert Whittaker and Paulo Costa would square of as part of UFC 284 in Perth, Australia. The bout, which has seemed inevitable for some time, has the potential to be a thriller and it is safe to assume that it least one of these men will be forced to suffer through some adversity.

Whittaker seems unfazed though, aware but unafraid of the sort of challenge Costa can present. Talking to Submission Radio Whittaker delved into his next matchup.

“I think he’s a tough guy, and I’m taking this fight with all the respect that I do every other fight,” Whittaker said. “I’m gonna go in there in February the best version of myself, and I think the best version of myself is better than everybody else in the division. I think skill-wise I’m better than Paulo across the board. He probably benches more than me. But my bench isn’t crazy anyway (laughs).”

“He’s very well-rounded. He’s a very, very well-rounded fighter, and obviously, he’s an athlete, a specimen. He’s got a lot of power, torque and explosiveness. But, I’d like to think I’m all of those things as well, and better.”

“I just think I’m better. Flat better. And I’m going to train my everything that I have over the next 17 weeks to put him away.”

Whittaker will want to make it two in a row following his dominant win over former title challenger Marvin Vettori.

Whittaker is undoubtedly the second-best middleweight in the world, closely behind Israel Adesanya, but the pair have already faced off twice with Adesanya winning both.

Though, should Whittaker keep winning he will force the issue and make have another shot at the reigning champion.