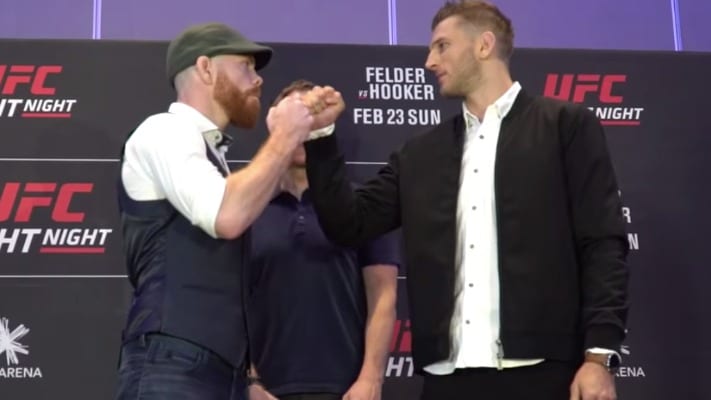 Felder’s eye is very swollen to start the round. Hooker putting together some nice shots now. Felder overextends on a shot and Hooker goes to take the back now. Felder manages to get out of it after getting to the cage. Leg kicks from Felder, Hooker responds with a jab and Felder gets a spinning kick to the body. A spinning backfist and hook lands for Felder. Big shots being exchanged by both men now. The round comes to an end.

A nice uppercut lands for Felder. A very nice lead left connects for Felder. Felder connects with a jab and wobbles Hooker with a leg kick. Now Hooker fires back with some shots. Felder with a body combination and leg kick, but Hooker fires back with a big couple of shots backing up. Felder backs Hooker up with a spinning back kick. Now Felder goes in for a weak takedown attempt that allows Hooker to clinch him up against the cage. The round comes to an end.

Leg kicks exchanged from both men now, and now they’re exchanging big shots with each other inside the pocket. Felder with a big right hand, and another one. Another big combination from Felder lands. Hooker comes in with a takedown attempt, and has Felder against the cage. Felder separates with a big elbow, and lands a left hook. Felder with another big right hand. Yet again Felder connects with a right hand inside the pocket. Felder really connecting nicely, and pops Hooker with a jab. The round comes to an end with a clinch from Hooker.

Hooker with a nice counter shot that connects. A big right hand lands for Felder. Hooker gets a takedown but Felder jumps right back up to his feet. Hooker has Felder pressed against the cage, but Hooker lands nicely off the break. Big right hand from Felder in response. The jab lands for Felder again, but Hooker gets a big takedown after Felder overextends. Felder trying to scoot to the cage, and does, but Hooker is just holding on. They get to their feet with Hooker on Felder’s back. Felder unloads elbows as much as he can before the round comes to an end.