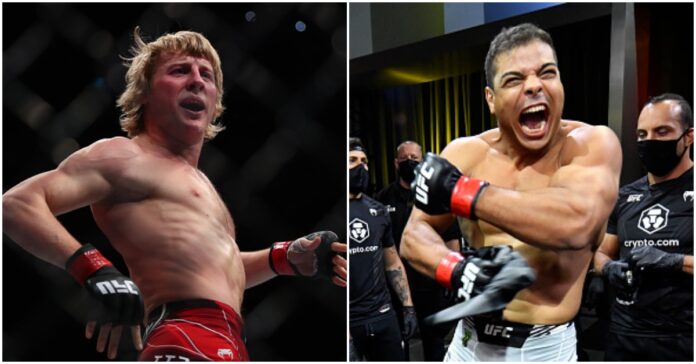 Paddy Pimblett has gotten a lot of attention for his ability to both gain and drop a significant amount of weight in a short period of time. Taking notice, former UFC middleweight title contender Paulo Costa is asking for help after dealing with his own difficulties cutting weight.

The UFC announced that Paddy Pimblett would be returning to London on July 23rd to face Jordan Leavitt. Pimblett will be making his third appearance in the Octagon. After back-to-back first-round finishes, Pimblett has already become a big name for the promotion. However, his antics outside of the cage have received just as much attention as his work inside it.

Following his win over Rodrigo Vargas in March, Pimblett documented an insane food-eating binge that saw him skyrocket to 202 pounds, 47 pounds heavier than his weight going into the UFC London contest with Vargas. While Pimblett has received some criticism for the strain he puts on his body, one fighter is looking to Pimblett for some advice.

In response to Pimblett’s July booking announcement, Paulo Costa tweeted asking ‘The Baddy’ to teach him the ways of the weight cut.

“Bro July 23? help me to make weight like that,” said Costa.

Pimblett responded, inviting Costa to come and visit him in Liverpool.

“Get over to Liverpool big man, we get you down to 185 in no time chesty,” Pimblett responded on Twitter.

Costa made headlines back in October when he showed up for his middleweight contest with Marvin Vettori noticeably overweight. Three days prior to the scheduled contest, Costa said he weighed 211 pounds, 25 pounds over the middleweight cutoff of 186 pounds for non-title fights. Having no intention of making the cut, the bout was rebooked as a catchweight at 195 pounds before being once again changed to a light heavyweight contest.  Costa was criticized heavily by fellow fighters.

With a fight booked against a returning Luke Rockhold in August, Costa will be looking to properly make weight this time and appears to have the Liverpudlian’s support.