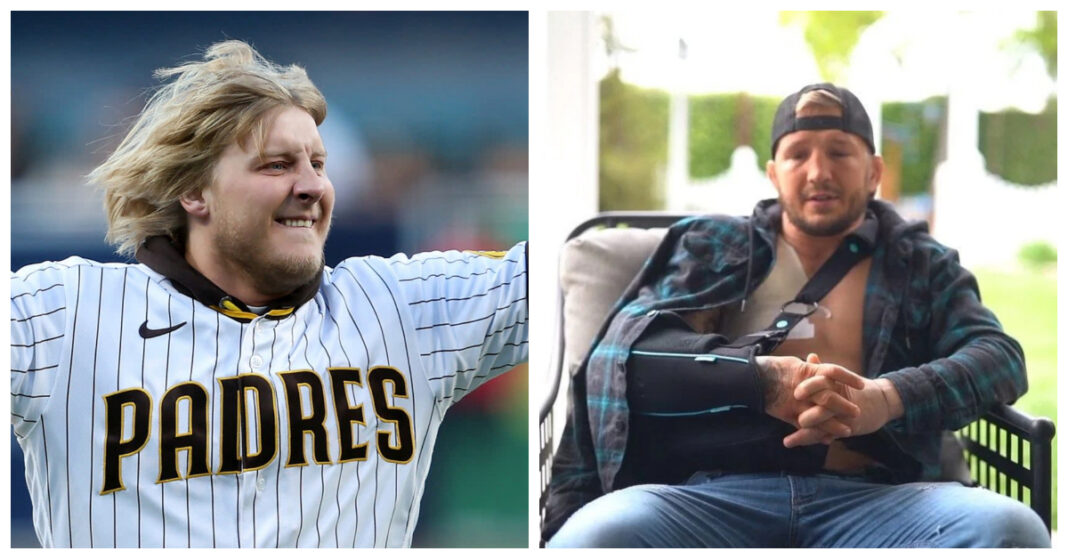 Paddy Pimblett did not hold back in his response to TJ Dillashaw.

UFC lightweight Paddy Pimblett has come under fire for gaining copious amounts of weight in between fights. While his off-camp binging may have endeared him to the fans, fellow fighter TJ Dillashaw is not a fan of the 27-year-old Brit. The former UFC Bantamweight champion expressed his disapproval of Pimblett’s work ethic during a recent appearance on the Food Truck Diaries with Brendan Schaub.

‘The Baddy’ is often likened to the Family Guy character ‘Chris Griffin’ for their resemblance in look with other habits. While he’s a good sport in playing along with the comparison, he wasted no time in responding to TJ Dillashaw’s criticism of him as an athlete, taking to Twitter to bash the 36-year-old veteran for his rebuke.

“Is this fella messin @TJDillashaw used to sell tee shirts with his fat face on it saying “fat Tyler” on when he came out of camp don’t forget ur own past u sausage. Cheating little juice head wud never have won a belt without them steroids u fucking mushroom”

Paddy Pimblett is yet to lose in the UFC having won both of his first two outings. He is slated to face Jordan Leavitt in his next bout on the UFC London card in July.

TJ Dillashaw has remained out of action since last July’s most recent outing against Cory Sandhagen. Prior to his latest win, Dillashaw was suspended for two years following a failed drug test during his flyweight title fight with Henry Cejudo. The 36-year-old veteran is known for his work ethic and competitiveness being a senior fighter in the UFC.

Having not lost his belt inside the octagon, Dillashaw is looking to get a shot at the current UFC bantamweight titleholder Aljamain Sterling. The top five in the 135-lbs division have not been booked for a fight ahead as they work towards an eliminator style format to determine the next top contender and champion.