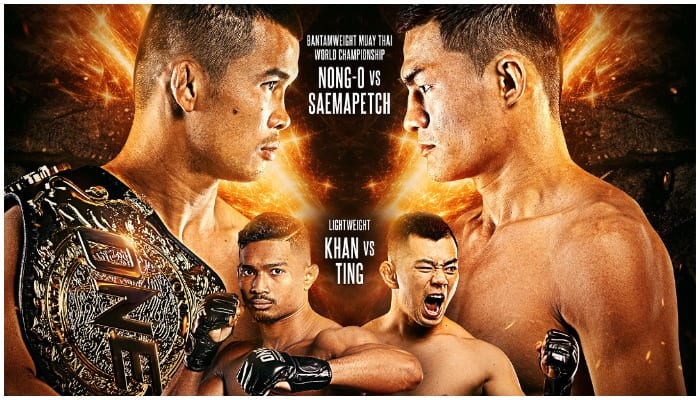 ONE Championship returns to Singapore this week for their penultimate event of 2020. ONE: Edge Of Greatness will take place this Friday, 22 November, inside the Singapore Indoor Stadium.

The eleven-bout card will be headlined by a Muay Thai bantamweight world title bout between reigning champion Nong-O Gaiyanghadao and challenger Saemapetch Fairtex.

A title bout between two Thai athletes is an uncommon occurrence in the ONE Super Series, and striking fans should be in for a treat. Outside of the main event ONE: Edge Of Greatness contains plenty of matchups worth paying attention to.

The prelims for ONE: Edge Of Greatness will begin at 5:30 am (EST) on Facebook, Twitter, YouTube, and the ONE Super App. Starting at 7:30 am (EST) the main card will be streamed on B/R Live.

Here is our pick of the key bouts.

Can Saemapetch Stop The Unstoppable?

Since arriving at ONE Championship in 2018, Nong-O Gaiyanghadao has been a one-man wrecking ball carving his way through the ONE Muay Thai bantamweight division. Powerful, quick and with a master’s eye when it comes to working out his opponent’s strategy, the 33 year-old Nong-O is a formidable fighter.

However, as skilled as he is, in his last bout, the four-time Lumpinee Stadium champion found himself tested by a relative novice in the form of young Frenchman Brice Delval. While Nong-O retained his title with a split decision victory over Delva, the manner of his win would have given hope to future challengers that father time may be catching up with the champion.

Saemapetch Fairtex may be the right athlete  to capitalize on this possible newfound gap in Nong-O’s armor. The 25 year-old comes from the much-vaunted Fairtex Gym and captured multiple titles while rising through the ranks of the highly-competitive Thai scene.

Saemapetch has the right physical and technical attributes to defeat Nong-O, but his best chance may be to come on strong in the final frames where his conditioning may prove superior. The bout should prove to be a fantastic matchup, regardless of the outcome.

After a run of two first-round defeats, Mayalasian born Kiwi Ev Ting bounced back with a stunning victory over Japan’s Daichi Abe at ONE: Masters Of Destiny. The 30 year-old now gets a chance to insert himself back into the ONE lightweight title picture if he can claim victory over Singapore’s Amir Khan. The pair will face off in the co-main event of ONE: Edge Of Greatness.

Khan comes into this contest on the back of three straight losses after falling to Eduard Folayang, Ariel Sexton and Saygid Guseyn Arslanaliev. The 25 year-old who trains out of Evolve MMA in Singapore has been touted as a possible future champion, and there will be a tremendous amount of pressure on him this week to halt his losing skid.

Khan is an impressive striker when he finds his rhythm, but Ting, who is a well-rounded athlete, has the tools needed to make life very tough for the hometown hero. Whoever wins this bout will find themselves back in the title hunt, so expect to see two athletes putting it all on the line when the doors close this Friday.

A Pair Of US Prospects

US fans will want to keep an eye out for the return of bantamweight Troy Worthen as well as the debut of Sage Northcutt’s sister Colby Northcutt.

Worthen, who is based in Singapore and is Amir Khan’s stablemate at Evolve MMA, made his ONE debut in July at ONE: Masters Of Destiny, where the former college wrestler defeated Rui Chen via second-round TKO. The 26 year-old will now take on the hard-hitting Chinese athlete Chen Lei.The American will need to watch for his opponent’s fast starts, but if he can survive the initial onslaught, he should be good for the win.

Northcutt will step into the ONE circle this Friday as the overwhelming favorite when she takes on Indonesia’s Putri Padmi in their flyweight clash. The 26 year-old Northcutt may be an MMA novice,  but she is likely to prove to be too much for Padmi to overcome. The Indonesian has only one bout to her name, a unanimous decision loss back in November of 2018.