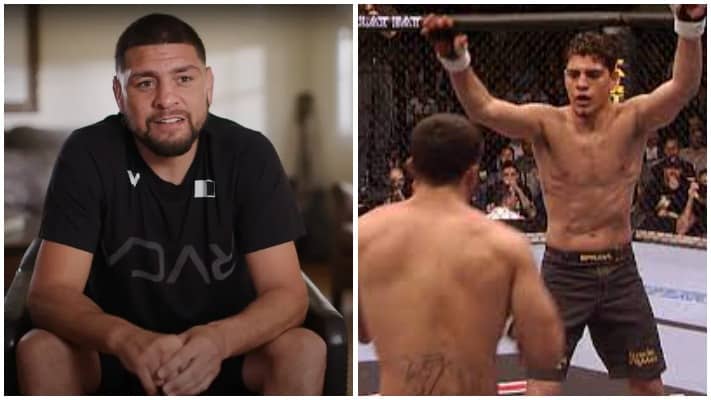 Nick Diaz returns to the Octagon for the first time in more than five years at UFC 266 when he squares off against Robbie Lawler in a rematch 17 years in the making.

The former Strikeforce champion has promised that he will be better than when they first fought in 2004 and has also seemingly ruled out using his patented trash talk that appeared to throw ‘Ruthless’ off during his first-ever KO loss.

“I’m not going out there to call him names or, y’know, I’m going to be a lot more sportsmanlike, I think, out there,” Diaz said on the UFC 266 Countdown show. “But that’s not what won me the fight last time. That surprised him a little bit, but I would have won the fight anyways.”

Despite being known for his brilliant trash talk, Diaz says that he struggles with the public speaking and the promotional work that comes with being an elite-level MMA fighter.

“I’m not somebody who’s good with words,” Diaz said. “Just the stress of being able to say the right thing, that was kind of a price I had to pay. Just doing that sort of thing [promotion] non-stop, I’d rather just be out there fighting.”

“People were really taking shots at me and trying to take me out in some sort of way before I go in there. It’s hard for me to show up in the middle of training and going back and forth. And I feel like the world is kind of hammering me so hard, making it like a fair fight … I always walked out there thinking ‘What am I doing, I can’t believe I’m doing this again. I’m like ‘This is not fair!’” (Transcribed by MMA Mania)

Do you think Nick Diaz will get his first win since 2011 when he takes on Robbie Lawler for the second time at UFC 266?