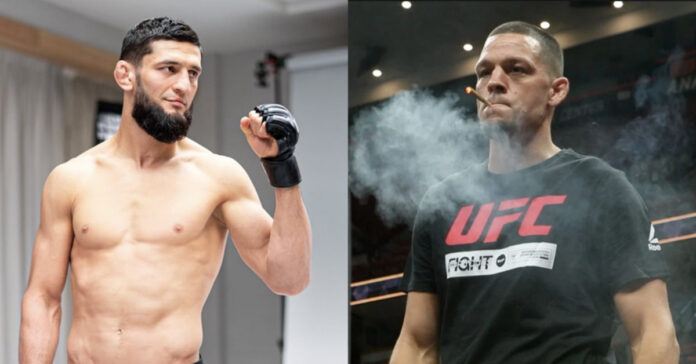 After a long and very public debacle with Dana White and the UFC, Nate Diaz (20-13 MMA) finally has his fight.

Diaz is set to go toe to toe against Khamzat Chimaev (11-0 MMA) at UFC 279, in a fight reportedly scheduled to headline at the T-Mobile Arena on September 10th.

The UFC chief business Hunter Campbell confirmed the booking on Tuesday, announcing the pair had both verbally agreed to the five-round main event bout in Las Vegas.

The news comes just a week after Nate Diaz stated on The MMA Hour that the UFC hadn’t officially offered him a fight, with one last bout on his contract. The Stockton star has made it clear for some time he wants out of the promotion, whilst voicing his ambition to explore new ventures. However, he further exclaimed he felt that the UFC are keeping him “hostage”.

Diaz vs. Chimaev is a matchup Dana White has been interested in booking last year, although it was reported that Diaz decided to turn down the fight.

Nate Diaz’s walk to the octagon took place in June 2021, when he came up short in a back-and-forth unanimous decision loss to Leon Edwards (19-3 MMA). However, the UFC welterweight hasn’t managed to get his hand raised in the UFC since 2016.

In the meantime, MMA fans have witnessed the rise of undefeated prospect Khamzat Chimaev, who most recently took out # welterweight Gilbert Burns (20-5 MMA) in a three-round war.

With the addition, the UFC 279 line-up includes:

Who do you think will win Nate Diaz or Khamzat Chimaev?