LowKickMMA.com
Home Boxing News Video: Nate Diaz kicked out of the venue by Police after backstage... 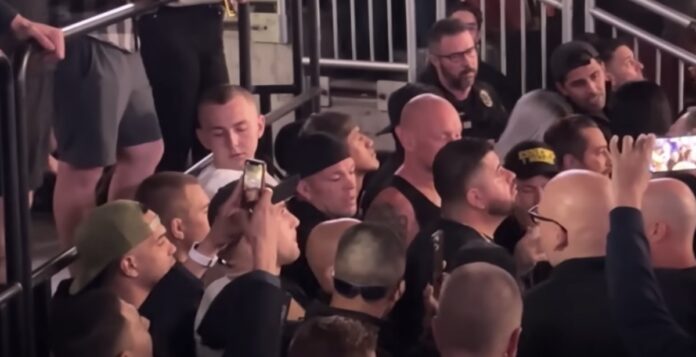 At one of the weekend’s most exciting combat sports events, all chaos broke loose after Nate Diaz and his entourage were involved in a wild brawl backstage.

The venue was set for Jake Paul and Anderson Silva to throw down, but fans would get an additional treat as footage would be released depicting a massive brawl that needed security and police to stop the violence.

The reasoning as to why the brawl occurred is still not public knowledge. Footage shows Nate Diaz and his crew backstage, as two posses of people faced off, arguing and screaming.

Footage of the Nate Diaz brawl backstage at the Paul vs. Silva fight

In the video, Nate Diaz can be seen getting handed what looks to be an open bottle of soda, and a second later you can see him launch it into the air, splattering whatever liquid contents it contained all over the other crew of people. This obviously set things in motion, and seconds later both crews can be seen on footage engaging in a wild brawl.

After the chaos backstage, the action moved out into the crowd, where Nate Diaz and his crew stood watching the Paul vs Silva fight. However, their presence caused instability in the crowd, and that combined with the brawl earlier was enough to get them removed from the arena entirely.

Later, Nate Diaz would take to Twitter, further sneak dissing Jake Paul and his crew. “The only real fighters here,” he proclaimed, taking a picture of his loyal entourage.

It is worth noting, the former UFC superstar is now a free agent. Any move he wishes to make in the combat sports stratosphere is his to be made. Like the scarface movie with the blimp in the sky saying: “The world is yours”, Nate Diaz literally has the MMA world in the palms of his hands. Until he does make a move, the MMA world will be eagerly waiting.

What do you want to see Nate Diaz do next? Should he fight Jake Paul or sign back with the UFC?