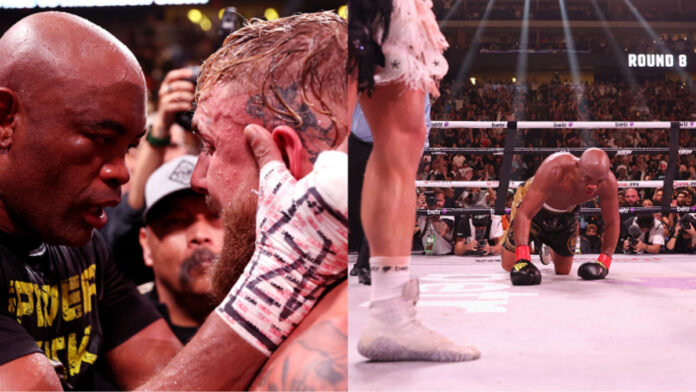 MMA legend and cherished icon Anderson Silva put up a valiant effort in his latest boxing match against Jake Paul. However, unfortunately, the effort alone wouldn’t be enough to seal the victory.

The fight was a competitive contest, with things looking very even up until the eighth round, where Paul would score his one and only knockdown of the fight. The jab for Jake Paul was the real difference-maker, as he was very active with it. His activity in general outshined the MMA legend, in fact. Paul greatly outworked Silva volume-wise, throwing a total of 215 jabs alone compared to a meager 75 attempted by the legend.

Accuracy was a different story, though. In the first round, Paul landed his jab with 5.6% accuracy, going 2 for 36. In that same round, Silva landed at a clip of 33.3%. However, he only threw a total of three jabs, landing just one. So, it was a story of accuracy and activity. That is, until the knockdown in the eighth round.

At the end of the night, the fight would ultimately conclude in a decision, with boxing’s most hated Jake Paul waltzing away with a victory. Not happy with his performance, the legend himself Anderson Silva would speak on things after the fight.

The next question was in Portuguese, but it was obviously something like “Will you be done fighting now?” because Anderson Silva shook his head and responded. “I can’t stop (fighting)… I can’t stop. You asked me about stopping or not, I can’t stop.”

One reporter mentioned that Silva was ahead in power punches, and wondered if the legend thought he was ahead on the scorecards leading into the last round. “You know, I fail in the strategy,” Silva sighed. “In the last round, Jake took a good punch… My base is not correct, that’s what my coach says…”

Silva would then go on to elaborate, saying that his fighting stance itself put him off balance, causing him to be knocked down by Jake Paul in the eighth round. He also would talk about a fighters union, mentioning that he believes he and Jake Paul could do something big to benefit the fighters.

Overall, Silva would indicate that he wasn’t ready to retire and that he was disappointed that he “failed his mission”. He also didn’t entirely write off a rematch with Paul, saying: “I don’t know, let’s go see what happens. Maybe (we’ll run it back), I don’t know.”

Would you like to see Anderson Silva retire, or rematch Jake Paul?