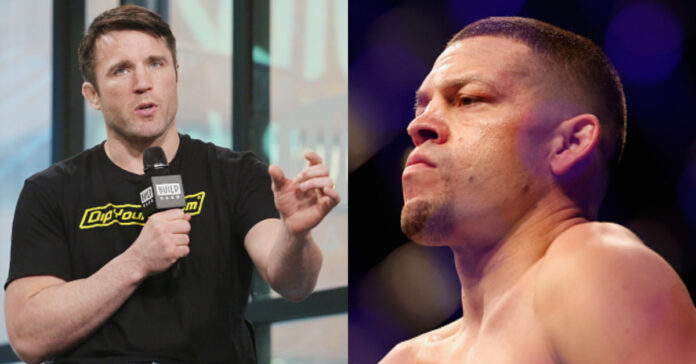 Nate Diaz has been trying to get back into the Octagon for several months following his last appearance which came just over a year ago.

On the last fight of his contract, Diaz looks prepared to move on from the UFC to pursue other lucrative opportunities in the world of combat sports. Knowing Diaz is likely headed out the door, many have speculated that is the reason the UFC seems to be dragging its feet on booking a fight for Diaz.

According to former three-time UFC title challenger Chael Sonnen, Nate Diaz has now accepted a fight and his return to the Octagon is imminent.

“I got a little inside scoop for you guys, which is Diaz has accepted a fight,” Sonnen said on his YouTube channel. “Diaz has a fight coming up. I gotta stop right there. I don’t know who the opponent is and I’m not holding that from you. And we know Chimaev and Nate have been associated together for a period of time now.”

Sonnen stopped short of announcing who Diaz would be facing in his highly-anticipated return but mentioned Khamzat Chimaev multiple times.

“I’m not announcing for you guys that it’s Diaz vs. Chimaev. I’m sharing some inside … Diaz has a fight. That I’m sharing with you guys. Is it Chimaev?”

Nate Diaz and Khamzat Chimaev were first rumored to square off when images of the matchboards in Dana White’s office were leaked ahead of UFC 276 while filming a podcast.

In a recent post on Twitter, Nate Diaz indicated that July 30th would be a good date for his final walk under the UFC banner.