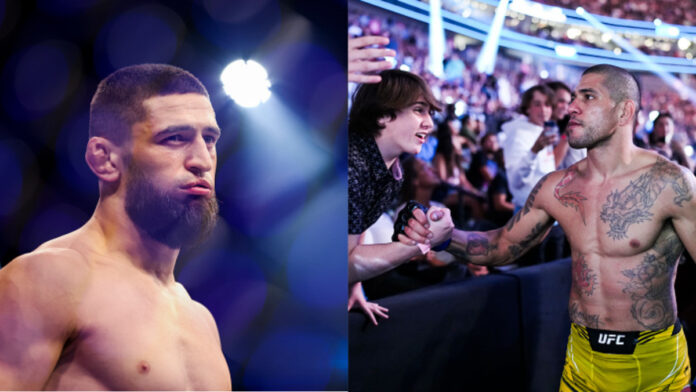 After a devastating finish by Alex Pereira at UFC 276, Khamzat Chimaev has now set his sights on his next desired opponent.

While the main and co-main event of UFC 276 didn’t really live up to expectations, one fight stood out as an impressive and intimidating performance by a UFC newcomer. ‘Poatan’ landed a clean left hook that dropped Strickland to a knee, and followed that up with a missile of a right hand that sent ‘Tarzan’ crashing to the canvas.

In only his third fight in the UFC, Alex Pereira had now broken into the top five of the middleweight rankings and has seemingly solidified a rematch with a man he knocked out in kickboxing, Israel Adesanya, for the middleweight title. However, with Khamzat Chimaev throwing his name into the mix, could this change things?

‘Borz’ most recently saw action when he faced Gilbert Burns at UFC 273. The fight is still regarded as one of the best of this year (so far) and by the time this year ends, may stand as the fight of the year.

It was a back-and-forth brawl that left no stone unturned. Both men had to dig deep, and it was surprising at the time that the fight ended via decision. As both endured so much damage that the fight easily could’ve been over several times.

Now, Khamzat Chimaev seems to be ready to get back into the cage, with his call out of Alex Pereira after UFC 276. Taking to Twitter, Chimaev would send a direct message to Dana White and the UFC.

“I’m want to fight with this guy @UFC @DanaWhite let’s make it,” he said.

Obviously not afraid of the devastating knockout ability of ‘Poatan’, ‘Borz’ has staked his claim on the fight he wants next. It’s unclear if Chimaev gets the fight or not, but if he does, it would surely be an insane test for both fighters.

Would you rather see Alex Pereira face Israel Adesanya or Khamzat Chimaev next?