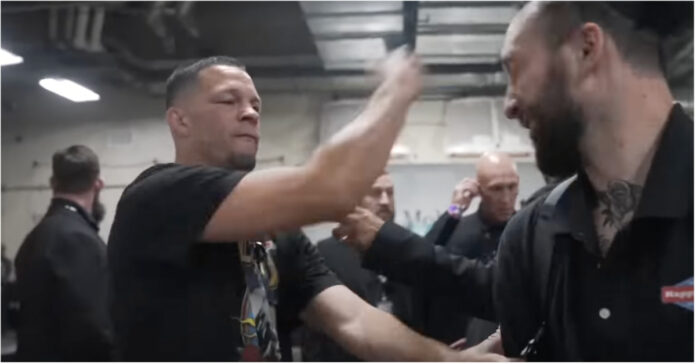 Last night we were witness to yet another entertaining chapter in the saga of Nate Diaz’s controversies, as backstage at UFC 276, during an impromptu interview, things got ugly.

The reporter for Nelk’s new Full Send MMA channel, known as ‘OGshawnymac,’ jokingly asked Diaz if he was there to watch Sean O’Malley, who is closely associated with Nelk. Diaz, would then lean in close to Mac, and say “nah, you better watch your tweets about my dude who fought recently.”

Diaz would then slap the microphone out of the reporter’s hand, then slapped his hat off. It is unclear what specific tweet Diaz is referring to but Mac does have a prominent Instagram page in which he posts MMA-related content and has done for some time.

This was Mac’s first week as a reporter for Full Send MMA, as he was officially announced just days ago as the YouTube channels reporter. Some time back, Nelk had put out on their social media that they were looking for an MMA reporter, which many applied for.

Ultimately Mac was chosen for the positions using a fan vote on Nelk’s discord server, previously Mac had started out posting interviews on his Instagram page and would also do work with the bare-knuckle boxing promotion, BKFC

“There’s a bit of a gap in the MMA world right now,” Mac said in Nelk’s announcement video. “We’re about to make Full Send number one. I’m a combat sports fans, there’s nothing I love more than sitting down Saturday night and watching the UFC.”

“I’ve been watching it since I was about fourteen/fifteen years old. I boxed amateur for 10 years I’ve got background in combat sports and yeah like I said, were gonna take this ting over.

What do you think, did Nate Diaz take it too far?