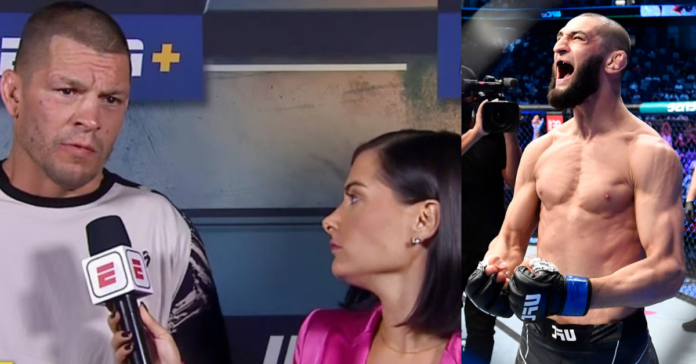 Nate Diaz will no longer be fighting Khamzat Chimaev at UFC 279. Due to a weight miss on the Russian’s part, Nate Diaz will now serve in the main event position against former Interim UFC Lightweight World Champion Tony Ferguson. ‘Borz’ will fight Kevin Holland in a five-round co-main event showdown.

“I think the UFC knows what they’re doing,” Stockton’s Nate Diaz spoke to ESPN’s Megan Olivi for his immediate reaction to the matchup shuffle. He continued, “I think they’re ready for this sh*t anyway … They called with that. I figured that’s what they would do. I didn’t even figure anything, it just all happened, flicked quick style, so whatever.”

Diaz and Chimaev got into an altercation backstage at the UFC 279 pre-fight press conference. The US-born athlete is claiming this as a win over ‘The Wolf.’ Diaz explained, “If I can get through this dude tomorrow then that’s 2-0 for the weekend. That’s a two-for-one.”

The UFC 279 main event is booked as Diaz’s final fight in the organization after making his debut in 2007. The UFC had booked the aged veteran against an undefeated, young, and hungry Chimaev. The Russian athlete then missed the 170 lbs limit and came in at 178.5. On getting a change in the booking, Diaz said he’s happy not to support this fighter, “It makes me happy that I’m not supporting the bullsh*it that they’ve been trying to push on me, the whole thing.”

“[He’s] like straight up a little leaguer playing in the major leagues,” Diaz said on Chimaev, “I’ll never fight him in [the octagon] but I’ll fight him right now if I could find his f*ckin’ b*tch ass.” The 37-year-old Stockton-born athlete explained that he will happily fight Chimaev right here, right now, but would never fight him in the octagon.

Both Nate Diaz and Tony Ferguson made their debut in the UFC after winning a season of The Ultimate Fighter. Both spent most of their careers at lightweight but will now meet each other in a welterweight main event showdown. This five-round affair has fans and pundits excited. Diaz and ‘El Cucuy‘ have earned their reputation for being two of the most exciting fighters in mixed martial arts.

“I don’t even know how to fight this guy, I’m going to watch the video tonight,” Diaz said it does not matter who he fights, he’s always ready, “But it don’t matter anyway, because I train for everybody always, anyway. I don’t train for a fight anymore, I just train to fight everybody always. Ready for war.”

Lastly, Diaz added that it is a great thing to be facing Tony Ferguson, “If it is my last fight … at least it’s with a veteran and somebody who’s respectable.”