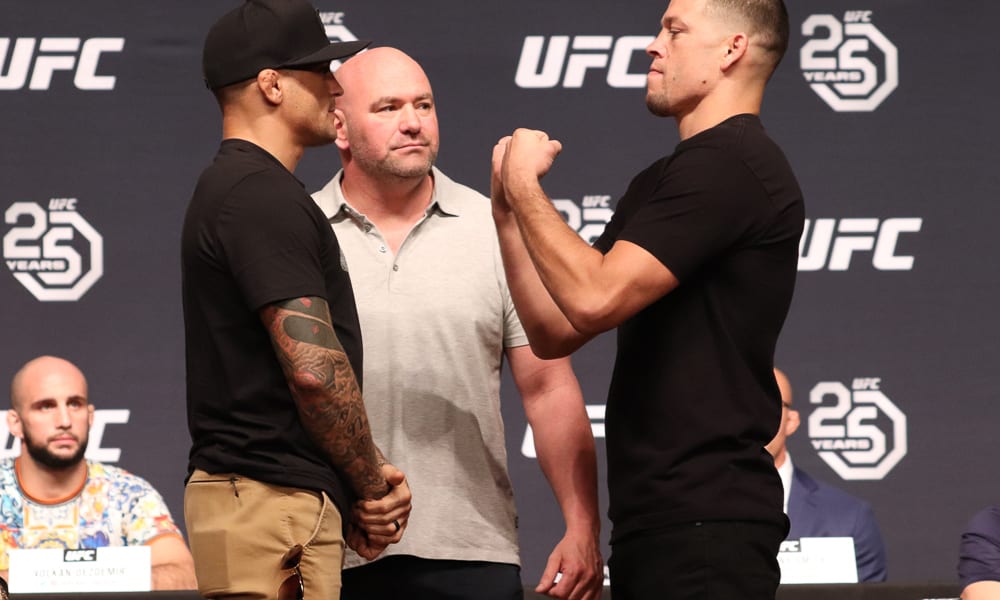 Nate Diaz claims Dustin Poirier “pu**ied out” of their UFC 230 matchup last year and questions why nobody is asking him about it.

Diaz returns to the Octagon at UFC 241 this weekend when he takes on Anthony Pettis in a welterweight bout. It will be the Stockton native’s first fight in nearly three years.

However, he could have made his return sooner had his originally planned UFC 230 lightweight bout with Poirier gone through. In the end, Poirier had to pull out through injury. But Diaz didn’t take the news well, and when asked why the fight didn’t happen, he had this to say.

“[It didn’t happen] because Dustin Poirier pu**ied out is what happened,” Diaz told ESPN. “We were supposed to fight and there was whatever going on with me and the UFC was happening because they were f*cking with me or I was f*cking with them, however they want to say it, but he jumped out of the fight because he couldn’t deal with it.

“He couldn’t sleep at night. I’m like, ‘why are you even worried about me? You’re supposed to be a fighter, don’t worry about what I got going on. I’m showing up to fight you. Why did you pull out and why is no one asking you that? Why are you getting a title shot?’ That’s a win for me.

“I already beat him. If me and you are supposed to meet for training tomorrow, for jiu-jitsu or boxing or MMA or whatever — we have an appointment. We’re going tomorrow at seven p.m. and we’re going to train. Me and you. And if you get a f*cking stomach ache or your tooth ache or your hair or any of that or something ain’t right or your girlfriend’s mad and you don’t make it to seven o’clock, you lost, dude.

“You can’t make it, you can’t cut it. Straight up, that’s a L. Justify it however you want.”

What do you make of Diaz’s comments on Poirier pulling out of their fight?