LowKickMMA.com
Home Boxing News Nate Diaz confirms he will be in attendance for Anderson Silva vs.... 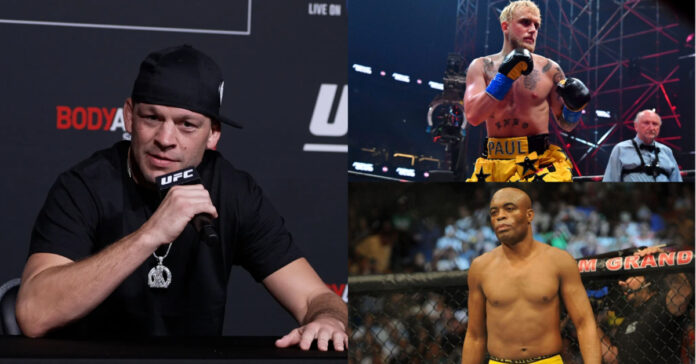 In what appears to be Nate Diaz plotting his next career move after finishing out his time with the UFC, the Stockton native has confirmed he shall be ringside when former UFC middleweight champion Anderson Silva takes on Jake Paul.

Diaz was able to ride off into the sunset last night after he emerged victorious in a battle of two legends against Tony Ferguson. A fitting tribute to end his time with the promotion saw the ‘209’ secure a slick submission in the fourth round to defeat ‘El Cucuy’.

Now as Diaz looks to step away from the sport and the promotion, for the time being, it seems he may be planting the seeds for his next career move as he confirmed he would be ringside for Jake Paul’s next fight against Anderson Silva.

Speaking to the media at the UFC post-fight press conference when asked whether he would be in attendance for the bout Diaz confirmed that he will, provided they can supply him with some high-quality tickets.

“Jake Paul and Anderson Silva let me get some tickets ringside. Yeah, I’ll go that that, that’ll be sick.”

Nate Diaz to enter the world of Boxing

It appears for now as Diaz steps away from the world of Mixed Martial Arts he will be joining many former competitors over in the world of Boxing.

The two men have traded blows back and forth previously and both seem keen to fight each. Now that Diaz is free from any contractual obligations with the UFC it seems extremely likely that this matchup could get made further down the line.

Paul took to his social media last night to respond to the news that Diaz was entering the world of Boxing and made it not so subtle about whom he believes he should take on.

“Nate Diaz is going into the sport of Boxing. I wonder who he should fight.”

Who would you favour in a Nate Diaz vs. Jake Paul boxing match?