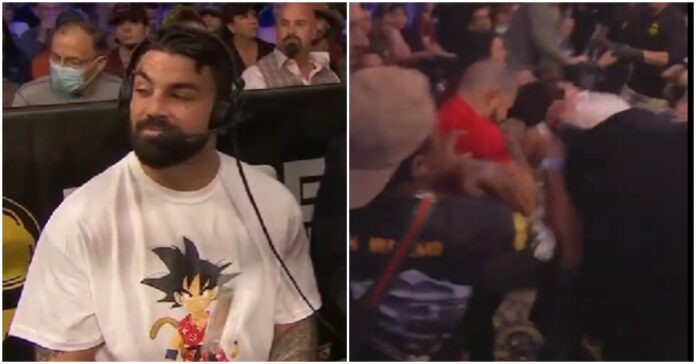 Mike Perry and Julian Lane will take their feud to the ring Feb.19 in BKFC’s second installment of ‘Knucklemania’.

Perry and Lane had recently gotten in a scuffle as Perry was guest commentating for a BKFC event. Lane threw something at ‘Platinum’ and hit him in the face and followed up by hurling insults at him. The two were then caught on video fighting ringside in the crowd.

Perry had announced that he would be fighting on the card Thursday, but an opponent was not named. According to MMA Fighting, a person close to the negotiations told them that Lane would be the opponent in the upcoming match. The bout was reported by Chris Taylor via Twitter as well.

Seals had a record of 25-3 going into the fight against Perry. Perry represented MMA that night in the MMA vs boxing matchups, and did so with pride. Perry fought out his contract with the UFC and ended with a record of 7-8 in the UFC. He was once a young and promising prospect, but many things including not having coaches octagon side led to his downfall. His last fight inside the octagon was against Daniel Rodriguez where he suffered a unanimous decision loss. he finished his last five fights with a 1-4 record.

He left the UFC in hopes to find more money elsewhere and he may be capitalizing on that with everything he has been doing recently. Perry is and always has been a fan favorite within the MMA community. Lane on the other hand, is a MMA veteran who appeared on The Ultimate Fighter 16. He has a record of 2-3 in BKFC and lost his last fight to David Rickels.

Are you excited to see Mike Perry take on Julian Lane at ‘Knucklemania’ 2?