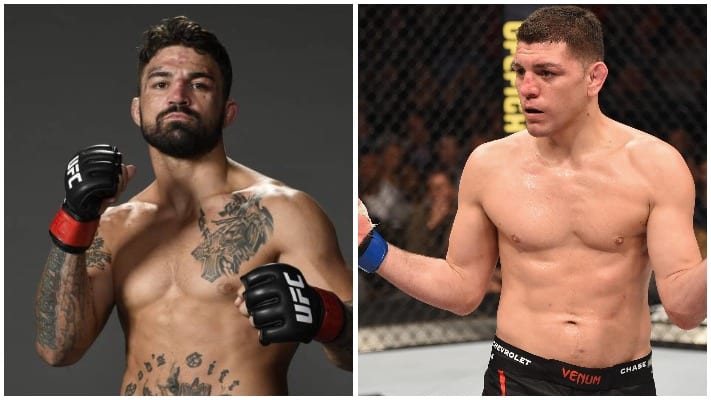 Popular welterweight Mike Perry is the latest fighter to call out Nick Diaz who is set to return to the Octagon in 2021. Perry took to social media and taunted Diaz in a series of posts, he wrote.

“Who you hanging with @nickdiaz209 ? Y’all look soft and your nose looks worse then mine,” Perry wrote. “Your big head is a great target for this right hand old man. Look like you been riding ig horses with that stance. If you a gun slinger you shooting a 22

“F*ck the Diaz brothers ! East coast b*tch ! I’m not your average internet shit talker @nickdiaz209 , you can cut a check and I’ll show up if you really wanna do something about it. You won’t tho…”

Perry joins a long list of fighters who have already tried to match themselves against the former Strikeforce champ. Conor McGregor, Leon Edwards and Stephen Thompson are just some of the names currently linked with Diaz who shocked the world by announcing his comeback after 14-week camp and a test weight cut.

Diaz has not fought since January 2015 when he lost a unanimous decision to Anderson Silva. The fight was eventually overturned to a No Contest after Silva failed a drug test for PEDs. Diaz also failed a post-fight drug test for marijuana and was subsequently suspended. The Stockton, California native is currently on a three-fight winless streak that stretches all the way back to 2012. Diaz lost to Georges St Pierre by unanimous decision at UFC 158. Before that he dropped another decision against ‘The Natural Born Killer’ Carlos Condit at UFC 143. Diaz last picked up a win back in 2011 when he beat lightweight legend BJ Penn over three rounds.

Perry is coming off an impressive win over Mickey Gall. He has been forced to sit out for a while due to an incident at a Texas restaurant that saw Perry accused of assaulting three people. The UFC has gone on record to say they won’t be offering the popular welterweight any fights until he has undergone some type of rehabilitation program to combat his ongoing issues.

Do you want to see Mike Perry vs. Nick Diaz?