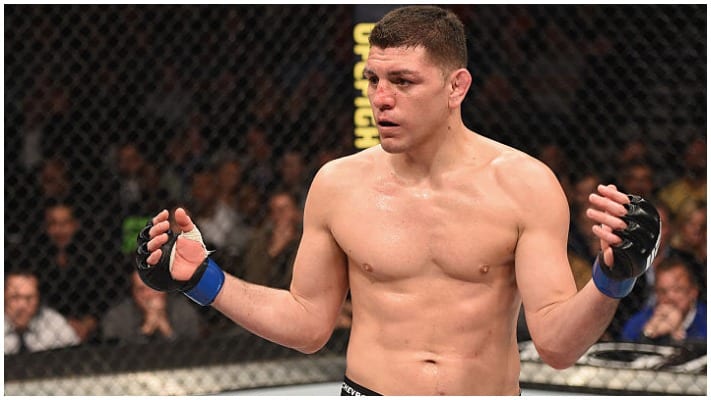 UFC superstar Nick Diaz is set to return to fighting in 2021 after successfully completing a test weight cut on Sunday.

Ariel Helwani of ESPN broke the news on social media last night. The veteran MMA reporter spoke with Diaz’s manager, Kevin Mubenga who confirmed his fighter was planning a comeback in 2021 and had successfully cut to somewhere between 175-165lbs.

“This is Nick Diaz earlier today,” Helwani wrote. “He weighs in the 175-165 pound range, per his manager Kevin Mubenga. He just completed a 14-week diet and training regimen. This is the first time he cuts weight in approximately four years, Mubenga said. Diaz wanted to do a test cut because he is keeping a close eye on the big welterweight fights coming up. He is “100%” planning on fighting again, per Mubenga, and is targeting an early 2021 return.”

Diaz has not fought since January 2015 when he lost a unanimous decision to Anderson Silva. The fight was eventually overturned to a No Contest after Silva failed a drug test for PEDs. Diaz also failed a post-fight drug test for marijuana and was subsequently suspended. The Stockton, California native is currently on a three-fight winless streak that stretches all the way back to 2012. Diaz lost to Georges St Pierre by unanimous decision at UFC 158. Before that he dropped another decision against ‘The Natural Born Killer’ Carlos Condit at UFC 143. Diaz last picked up a win back in 2011 when he beat lightweight legend BJ Penn over three rounds.

Despite his inactivity and poor form in recent years Diaz remains one of the biggest draws in MMA. Now the tough part begins. The Diaz brothers have an infamous reputation as fierce negotiators. Can Nick come to a deal that will see him return to the Octagon? If so, who will the UFC brass decide to match him up against?

Who should Nick Diaz face in his 2021 comeback fight?