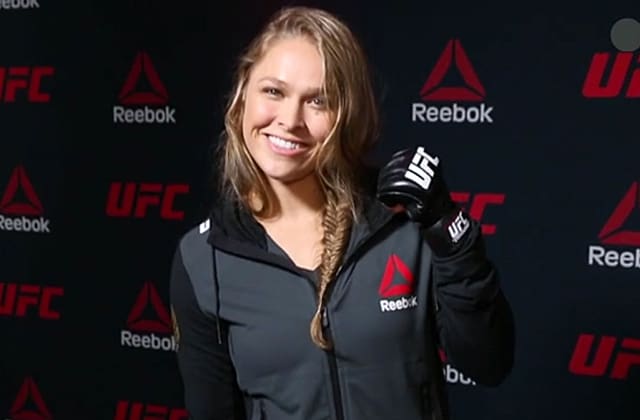 Rousey, who has not fought since losing the title to Holly Holm back at UFC 193 in November of 2015, started getting serious about a comeback in the late summer, according to Mike Dolce.

“She could have fought on the New York card most likely, but that would have been pushing the timeline just a little too much,” Dolce told MMA Junkie. “She decided to give her body a little more time so she can perform at her best.”

Dolce explained that Rousey has been dealing with various injuries for years and they finally caught up with Rousey after her last bout so she decided to take care of them before stepping back inside the world famous octagon.

“She’s been fighting with nagging injuries for years,” he said. “Those injuries have always been there, and it’s been a matter of managing those injuries for training camps – of which last year, she had three fights in nine months on three continents. That doesn’t leave a five-round fighter a lot of time to heal.

“She was able to take the last year or so to really heal up, take care of herself, and get her body back to the world-class form that we all, as a team, wanted to be at. That’s what puts us into this position now. Ronda’s ready to go.”

While many were surprised that Rousey chose her return to be Nunes, Dolce wasn’t one of those people because in his eyes Nunes should be recognized as who she is and that is a world champion.

Dolce went out on a branch and said that he is “100 percent” confident that Rousey is recovered from her knockout loss and will be in peak condition for this upcoming title fight.

“Ronda’s last loss, prior to Holm, was in the Olympics, and she was able to battle back and win the bronze, and continue on in her martial arts career to remain undefeated for the better part of a decade,” he said. “That’s the mentality we’re talking about. There’s no backing off with an athlete like Ronda. She’s very rare.”